The counter-terror agency claims detained Kashmiri photojournalist Kamran Yusuf is not a ‘real journalist’ because he did not cover development projects.

New Delhi: The National Investigative Agency’s chargesheet against Kashmiri photojournalist Kamran Yusuf has claimed that he is not a “real journalist”. Why? Because a real journalist should have been covering the government’s development projects in the area. That, according to the agency, is a journalist’s “moral duty”.

The irony is that though Yusuf’s work was largely based on the conflict in Kashmir, “his cameras and computers did in fact yield lots of photographs of precisely such development projects”, his lawyer, Warisha Farishat told The Wire on Friday.

The journalist was detained without charge in September last year, and then booked as a “stone-pelter” in a fresh chargesheet filed on January 18. The chargesheet also accuses him of “conspiring to wage war against the Government of India” by carrying out “terrorist and secessionist activities” in Jammu and Kashmir. On Thursday, the NIA submitted documents to the additional sessions court in Delhi to buttress its arguments that Yusuf is not a journalist but a stone-pelter.

The NIA’s case is not only full of bad grammar but, say journalists, questionable logic too.

“Had he been a real journalist/stringer by profession,” the NIA says, “he may had performed one of the moral duty of a journalist which is to cover activity and happening (good or bad) in his jurisdiction. He had never covered any developmental activity of any Government Department/Agency, any inauguration of Hospital, School Building, Road, Bridge, statement of any political party in power or any other social/developmental activity by the state Government or Govt. of India (sic).”

The chargesheet then also goes on to list all the activities of security forces and the state that a ‘real’ journalist would have covered: a blood donation camp, a free medical camp, skill development programmes for unemployed youth, various tournaments, an iftar party during Ramzan and “taking the local student for India Tour – free of cost”.. 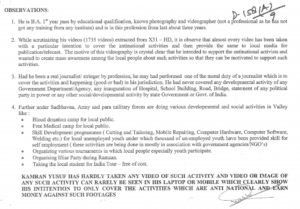 “Kamran Yusuf has hardly taken any video of such activity and video or image of any such activity can rarely be seen in his laptop or mobile which clearly show his intentions to only cover the activities which are anti national and earn money against such footages,” the chargesheet says, or rather shouts, since this section is in all caps.

The chargesheet also contains a “scrutiny” of the video and audio files on his hard disk.

While stating that Yusuf has been “in the profession” of photography and videography for three years now, the NIA maintains that he is not a “professional” because he never received any formal training.

Yusuf’s family has refuted the allegations against him, saying that the NIA is misrepresenting him. “These are fabricated charges. Everyone here knows that he was a freelance photojournalist for the past four to five years and not a stone-pelter,” Yusuf’s uncle told The Wire last month. “They don’t have any evidence against him. If it’s a crime to cover events in South Kashmir, including police and government functions, then all Kashmiri journalists and photojournalists should be booked.”

Most of the calls are to fellow photo journalists, including one who works for the “patriotic” news channel, Republic TV owned by Rajeev Chandrasekhar, an independent MP and deputy convener of the NDA in Kerala. #KhabarLive

As ‘Crypto Bubble’ Ready To Bust, Is Your Money Safe In India?