The moment Vijay Shankar heard that a Waghri film was in town he landed up in NALSAR with a van load of women, men and children from the Pardhi community who filled the auditorium with their infectious energy!

There were many reasons why the Hyderabad screenings of Sikkidre Shikari, Ildidre Bhikari were special. Not only because there were three of them between February 10-12. The first one, as part of the Social Justice Film Festival, in the beautiful campus of NALSAR, where it was the singing of birds that drowned out the silence around us; the second in La Makaan a quaint, but progressive corner of the city where we were enveloped by an eclectic if exclusive youth culture. And the third in the campus of the University of Hyderabad organised by the Centre for Regional Studies and the Communications department where we could feel the presence of Rohith Vemula and his dreams haunting our souls.

The screenings were especially special because of this Pardhi young man our well connected Kumuda from the Hakki Pikki community was able to reach out to when we reached Hyderabad. The Pardhis are also a nomadic community, criminalised by the British who are connected to the Hakki Pikkis of Karnataka through Waghri boli, the common language they speak, their common history of flight from Gujarat and the war between Akbar and Rana Pratap, the Goddesses that they worship and the clans they are divided into. “So lovely to listen to them speak. Their Waghri is so much softer than ours….it sounds like Mangalore Kannada” Kumuda exclaims! 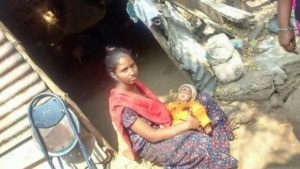 Vijay, a M.Sc graduate in Yoga not only brought his people to the screenings. He even took us to them. Our visit to two of their settlements within the centre of the city revealed worlds within worlds. In the first settlement we were not very welcome. Not least because of two pastors guarding a church at the entrance – perhaps because they felt we had come to misguide their flock that keeps threatening to fly away! But we were happy to find some relatives of Kumuda who came running out after hearing her voice and wanted to ply us with tea and breakfast. And more brethren of the Bannerghatta folks who had heard of us and our connections with the community and started rattling out all the names so familiar to us. No better joy than to find friends amidst strangers and strangers who instantly turn into friends.

The second settlement in Singareni colony, Syedabad was more welcoming. The exterior was depressing. 18 years since more than 125 families have settled here. No electricity. Just some innovative if dangerous and tangled rerouting being done from the main wires on the main road. No water. Tankers outside dumping water into large drums at the entrance. No Swatch Bharat. Only one sad looking sewage pipe that looked lost in the middle of colony…not knowing where it was coming from or going to.

The only presence of any “governance” is the little anganwadi with bright faces that look curiously at the passing strangers.

A tentative, tenuous and degraded existence breathing in despair. But strangely enough exhaling hope. Hope because of the resilience of most marginalised communities that manage to survive despite the attempts of the mainstream to push them beyond the pale of what passes of as “civilisation” even while retaining a core sense of what it is to be human.

A humanity and hope one sees in the bright smile of 9 year Shreesha who had come for the film the previous day and can barely contain her suppressed delight about what she had seen;

In the shy and sparkling eyes of Durgesh, a young boy proudly presented as a champion hunter who could catch the most elusive theeetra and batera;

In the mounds of orange khakra flowers and the purple yekkada/Arka flowers that are being sorted out and cleaned to be taken and sold in the markets by the women who are getting ready for Sivaratri. The women of the community have developed a formidable reputation in the local markets where they sell flowers, fruits and vegetables;

In the white bearded dignity of Babulal who sits on a rickety plastic chair with his bright pink shirt, matchstick legs and walking stick to tell us the story of his people in his quavering voice;

In the pride of a younger mustachioed Jaisingh who continues the story of how they landed up inside Hyderabad with the loud and authoritative voice of all old world patriarchs who are born story tellers: 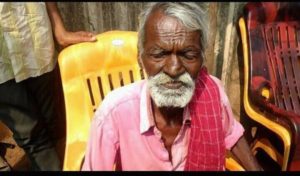 Once upon a time the earlier Nizam of Hyderabad had a Rajphoda (Royal wound!) that could not be cured by any doctor, vaid or hakim who lived in the kindgdom. Fed up with all quacks in the city, he asked for people from the jungles and mountains to be brought to him. He had heard that only they had the cure for his royal wound. And so the soldiers spread out across the jungles and found the Pardhis (people of the mountains) who they started rounding up to bring to the city. “Where are you taking us?” they asked in fear. “Our Nizam has a Rajphoda. Cure him and we will release you” the soldiers promised. The Pardhis caught 10 theetras (partridges) and proceeded to treat the Rajphoda with their fresh blood that brought out all those worms that were keeping the wound alive. The laborious treatment continued until the Rajphoda fully dried up and healed. The happy Nizam then made a gift of six villages to the Pardhis where they could settle down and live. Even if unfortunately it was not happily ever after.

For then came the British under whose Hukkumat the Pardhis were declared as thieves and they had to apply for permits if they wished to come into Hyderabad. Slowly they dispersed to the other states of Tamil Nadu and Karnataka.

Another story he told speaks of how the Nizam took a Pardhi woman as one of his numerous wives. She prevailed upon him to gift land to her people which happened to be in Jalpalli a place that is sacred to them. To this day every year all the different clans of the Pardhis come there in the thousands on Holi, set up their tents and carry out their rituals that include sacrifice and feasting.

“We may be from anywhere, be it India, Pakistan or America where some of our people have gone but we all consider that we are from Jalpalli. But look what is happening now in Jalpalli. The Patedaars or caretakers we had entrusted our sacred land to, have now become dalaals. They are selling and buying land there. Our own people are buying land there. Can we buy and sell our own home”? he thundered in agony asking that we should all help in saving Jalpalli from the clutches of the real estate mafia.

As we contemplate on the enormity if not near impossibility of that task and make our way out of the colony in which these free souls are trapped we are confronted with two almost simultaneous sights that took more than a moment to sink in. One the open doors of a tent in which is sprawled out a middle aged woman. Her face and eyes blank. She has been totally paralysed we are told and can not move. She has nobody and is fed by the people from the community take turns in bringing her food. Outside in the corner of her tent is tethered a goat with three little kids clambering around and on the mother. On closer look we realise that she has just delivered. And the babies even while teetering on their new born legs are heading straight to suckle from their mother. She is tired but standing straight and stoic. While cleaning and nursing her little ones. 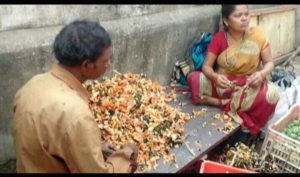 A two month baby sleeping in her mother’s lap stretches languorously in the sun while little Shivangi peers at us curiously while sucking on the green tamarind that she generously offers us when we ask for it.

We go back to the final screening in the University of Hyderabad with conflicting emotions and questions as always about callous and indifferent governments on the one hand and differing notions of progress, development, aspirations, human dignity, education and autonomy on the other. Questions and reflections that fed into the discussions that followed the screening. Discussions that this time also included debates on how “marginal” faiths are being appropriated by mainstream religions – missionary driven Christianity on the one hand and Brahminical Hinduism on the other. Dangerous in times when we are seeing the fundamentalisation and militarisation of all faiths and the wars over Gods who perhaps are not as crazy as their followers.

Perhaps we should all go to Jalpalli for Holi to find the answers. Anyway Vijay Shankar and his friends have extended a generous invitation to all of us to go stay with them and celebrate the festival with them the way that they do! #KhabarLive