Big-time voter inducement no Bar for Council elections in Telangana, AP. From plain cash to expensive gifts like smartphones, luxury furniture and package tours to high-quality liquor at cocktail parties, members of the Bar could be spoilt for choice.

K Mahender* recently put off plans to buy an Ultra Smart LED TV. And M Syamala* just decided not to purchase a high-end refrigerator. Both are among the several other practising advocates in the Hyderabad High Court who are waiting for costly goods to land on their doorstep. Free of cost.

Welcome to the Bar Council election mela for Telangana and Andhra Pradesh where the voter price tag has gone up many notches. From plain cash to expensive gifts like smartphones, luxury furniture and package tours to high-quality liquor at cocktail parties, members of the Bar could be spoilt for choice. 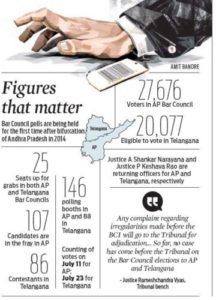 The stakes are high since contesting the Bar Council polls is seen as bringing status, recognition and respect. So much so, some advocates with deep pockets don’t mind inducing voters with goodies – like political parties do during the Lok Sabha or Assembly elections.

With polling scheduled for Friday, the budgets of some of the contestants indirectly supported by political parties range from Rs 20 lakh to a whopping Rs 3 crore.Also on offer are promises to get housing sites and health cards to the voters and their families. Enhancing the insurance cover from Rs 5 lakh to Rs 10 lakh and implementing other welfare measures are part of the big basket of promises.

Advocate N Krishna Kumar Goud, who is a candidate, claims he has information about a lorry load of liquor brought by some candidates to host ‘parties’ for voters. “Like politicians, advocates are distributing gifts to woo the voters,” he cribs. He claims he has complained to the election tribunal and the Bar Council of India and sought action.

Members of the advocate community fear such inducements will defeat the very objective of the Bar Council. K Ramakrishna Reddy, former advocate general of Telangana, says luring voters is very unfortunate. “I have never seen such things in the past 20 years. There is a need to have a fair election,” he opines.

ALSO READ:  When 'Parents Dies' At Court Premises Over Shock Of Sons 'Arrest' In Bhainsa Town Of Telangana

As part of their campaign, several candidates are busy visiting various Bar associations to seek votes. They first organise meetings with advocates who are influential and wind up their tour with evening parties.

Kanakamedala Ravindra Kumar, TDP Rajya Sabha member from Andhra Pradesh and also a lawyer, says: “I served two terms as a member of the Bar Council, but I have never seen huge money spending as is happening now. However, there are some who are not splurging.”Advocate A Giridhar Rao, another candidate and former president of the Andhra Pradesh High Court Advocates’ Association, points out that the Bar Council is a statutory body meant to work for the welfare of advocates. “How can a member of the Bar Council look into the misconduct of an advocate if he gets elected by unhealthy means?” he wonders.

Jandhyala Ravi Shankar, another noted advocate, says: “It’s now become very difficult for an ordinary advocate to contest the Bar Council election because of its financial implications. I am deeply saddened by this trend. It is a festival for some of the voters.”

In advocate P V Krishnaiah’s view, “Those who spend more money will give an impression that they will work for their vested interests and not for the welfare of the advocate community.”According to advocate T Sriranga Rao, some of the candidates are even booking halls for partying.“The tribunal constituted by the Supreme Court to monitor these polls should have a vigilance wing to curb such practices,” he suggests.

Advocate and former information commissioner P Vijaya Babu concurs. “I heard some of the candidates have spent up to Rs 75 lakh. The virus in the political system is now entering the judiciary.”

Some contestants, though, continue to be optimistic saying voters would favour only those who have credibility and character.

They may not admit it openly, but various lawyer associations and major political parties are extending support to select candidates. Already, both the state governments have announced various sops like funds for the advocates’ welfare trust and health cards. #KhabarLive