While most palaces in South India have rich heritage, none are as interesting as the Chowmahalla Palace in Hyderabad. Built by Nizam Salabat Jung in the 1750s, the Chowmahalla Palace is an iconic site of Hyderabad, a place of praise and admiration. Around mid-20th century, Osman Ali Khan, the seventh and the last reigning Nizam of the Hyderabad state was regarded by many as the richest Muslim ruler in the world.

However, following the Nizam’s demise, his heir Mukarram Jah succeeded Osman Ali Khan in February 1967 but submerged in financial crisis. Numerous legal battles from 2,000 descendants and 476 legal heirs of the different Nizams of the past, led Jah to eventually relocate to a sheep farm in Australia. 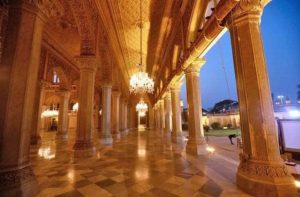 Between 1967 and 2001, the Chowmahalla shrunk from a whopping 54 acres to just 12 acres. The land was acquired by real estate developers, who demolished the 18th century buildings and erected concrete apartments in their place. Almost 27 years later, it was Jah’s first wife and Turkish princess Esra who set out to put an end to the legal disputes and helped restore the palace to its original glory.

Today, this opulent 18th century palace compound, comprising of several grandiose buildings and four garden courtyards, is revered by visitors. The magnificent durbar hall, Khilwat Mubarak, where nizams held ceremonies under 19 enormous chandeliers of Belgian crystal is a dazzling sight. Inside the palace, there are several things on exhibit including weaponry, arts and crafts, nizam’s personal possessions and a collection of carriages in addition to a 1911 yellow Rolls-Royce and 1937 Buick convertible. 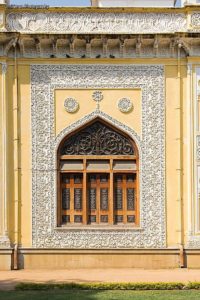 Painstaking conservation has restored the grandeur of Hyderabad’s Chowmahalla Palace
While Hyderabad’s heritage structures and sites are being seen as prime real estate up for grabs, the restoration of the Chowmahalla Palace to its age-old grandeur, putting it on top of the city’s must see bucket list, is a silver lining.

“This has been the most extensive effort to restore the Palace to the state it was when it was built. We have restored the original colour after trying out 500 samples and colours,” said Anuradha Naik, conservation architect, working on the project. The structure dates back to late 18th century when construction began in 1750. It was completed in the mid 19th century during the reign of Asaj Jah V.

Once spread over 60 acres near the city’s Mecca Masjid, the palace complex with its eight buildings is restricted to just about 12 acres now. A big moment was the coronation of Mukarram Jah Nizam VII in 1967 after the demise of his grandfather Nizam VI Mir Osman Ali Khan.

Chowmahalla Palace, as the name suggests the meaning ‘Char Mahal’ (Four Palaces). It was the residence of the Nizams of Hyderabad.

The grand architecture, intricate designs on it and the decoration styles reflects how royal but elegant was the lives of Nizams in that era. 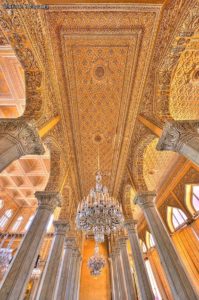 The buildings had lost their charm with the passing time, and then the present heir of the Nizam started renovation. It took almost 5 year to complete. In January 2005 they decided to open this place for public.

There are different galleries showcasing crockery, clothing, furniture, photographs and weapons of Nizam’s era. Vintage cars and buggee display is a major attraction for Car lovers.

The Palace Area
The complex consists of two courtyards, the Dharbar Hall (the grand Khilwat), fountains and gardens.

The Northern courtyard has long corridor of rooms at one side called as Bara Imam. This space was for administrative wing at the time of Nizams. The other side of the courtyard are mirror images of the rooms which is called Shishe-Alat. These were used as guest rooms. 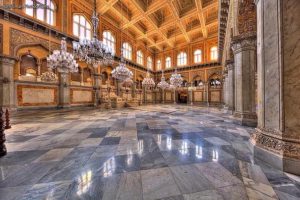 Darbar Hall/Khilawat, was the seat of the Nizams and a place for holding darbar and other ceremonies. This place actually looks royal with its grand pillars and Takht-e-Nishan, a platform made of pure marble used as seating place of Nizam. The darbar hall is decorated with 19 Chandeliers of Belgian crystal, which has been reinstalled while recent renovation. All the chandeliers are of different designs.

Clock Tower is a famous structure of the palace complex. It is above the main gate and also known as Khilwat Clock. The clock is ticking for about 250 years now.

Architecture Style
The construction of the palace started in the late 18th century (1750) and completed in 1869. Hence there is a combination of many architectural styles. It has domes and arches of Mughal style and also have many Persian elements. You can see stucco work embellishing the Darbar hall. The intricate carvings done on the walls and ceilings are impressive.

After 1976, however, the palace complex was left untended and uncared for till Princess Esra, former wife of Mukarram Jah, stepped in to begin restoration efforts in 2000. 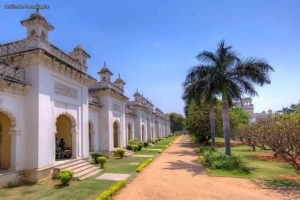 “For nearly seven years, a team lead by Rahul Mehrotra, Marthand Singh and Najib Jung worked to carefully catalogue, ideate and curate a unique experience that gives a hint of the life of royalty. The other buildings are also being restored in stages,” said Kishen Rao, director of Chowmahalla Palace, who has been involved in the project right from its inception.

“We used a lime-friendly product and matched it to the original colour. We scraped off layer after layer and found the original colour. We used a 20% darker shade as lime fades as it sets in. The real challenge was marbling the front pillars, which was done for the first time. It took us six months of trial and error and close to 500 samples to get it right,” recalled Ms. Naik. The result is a stunning transformation in which pillars appear to have a glaze of newness.

Inside, there is a subtle change in the colour schemes and a more resplendent finish to the walls and ceiling with delicate daubs of colour on the intricate stucco work that dominates the building.

“This is an ongoing process. The upper floor of the darbar hall has been carefully restored taking care of the steel spans and beams,” said Princess Esra with a hint of pride.

ALSO READ:  Distressed 'Cab Drivers' In Telangana Struggling To Survive With No Income And Mounting Debts

Inspired by the Shah of Iran’s palace in Tehran, Chowmahalla {which means four palaces} is said to have assimilated the architectural styles of Persia, Rajasthan, Europe, and Indo-Saracenic. Although all the four palaces aren’t open for public viewing, we went walking along courtyards flanked by lush greenery and ornate fountains and the official darbar that holds many iconic stories. 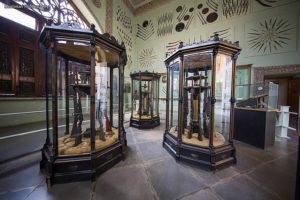 Situated in the Old City of Hyderabad, Chowmahalla is thronged by hundreds of visitors every day. The sprawling gardens are filled with curious visitors exploring the charm of the palace in bits. The four palaces — Tahniyat Mahal, Mahtab Mahal, Aftab Mahal, and Afzal Mahal are architected in different colour patterns and significance. It’s rather unfortunate that they’re not open for visitors, but if you’re the curious kind, we recommend you peep in through the grills for a quick glimpse.

The pristine corridors of the palace lead you to halls and museums that are dotted with paintings, royal portraits, pictures in sepia and black and white. The museums full of artefacts, weapons, outfits, crockery, and photographs are usually open for visitors. The palace can also make your childhood dreams come — if you’ve ever dreamt of wearing the royal outfits, you can make it happen. At Chowmahalla, you can dress up in the outfits of the erstwhile Nizam and get portraits taken by the palace’s resident photographer.

Whether you’re an art lover or an architecture enthusiast, Chowmahalla can cater to all your interests. We urge to you to check the Khilwat Clock, a clock tower which is over 100 years old. While you’re at it, we suggest you visit the garage in the premises to see the 1912 Rolls Royce Silver Ghost {owned by the royal family} which apparently remains as shiny and glossy and in great shape as it was when it was brought in. End your exploration at the palace’s canteen to devour the famous onion samosa at INR 15 a plate.

Note for Travelers
The Palace is located at Motigalli, very close to Charminar. It is well connected by public transport. The palace open from 10am to 5pm on all days except Fridays and National holiday. Entry charges are Rs.80. You need to pay Rs.50 extra for using still camera and Rs.200 for Video camera. There is ample parking space outside. 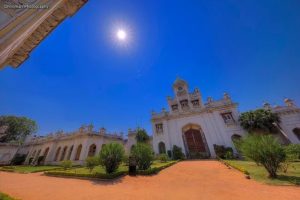 To see the place and the surrounding area you will need 2-3 hrs of time. There are some trees and garden area where you can sit and relax. There is small refreshments store also inside. If antique or metal items interests, you can purchase some here.

Photographer’s Note
The place interests photographers especially for its architecture. There is a lot of scope from big monuments to small intricate designs that you can shoot. As in many such monuments Tripods are not allowed. Suggested Equipment: A DSLR + Wide Angle Lens + A prime (optional) #KhabarLive