The dying art of ‘Bidri craft’ on wares in Hyderabad, which was once synonymous with royalty, now has just two artisans practising the trade in the city. The 14th century Persian art of Bidri craft adopted as a royal profession by Nizam of Hyderabad. This art can be seen in all Nizams wares including big jewelry and armoury mounts. The throne of Nizams also crafted with Bidri art.

As we enter craftsman Khaleel’s workshop, one might want to check the name-board twice because the place looks very different from where we’d imagine the beautiful Bidri art pieces we see at pricey art exhibitions, are made. There are blackened art wares stacked on the shelves and a few artisans squatting on the floor, chiselling minute metal pieces. In contrast to the solemn picture inside the shop, its owner Khaleel Ahmed is happy and excited.

Khaleel wants to remind his visitors of the glorious past of Bidri art and takes down album after album, certificates and awards he has won, at a time when Bidri handicrafts enjoyed unsurpassed patronage from the government. But today, the art is on a steady decline. There are only two manufacturers of Bidri wares left in Hyderabad today – the very same Deccan peninsula which was once a hub of this rich, intricate Persian artwork. 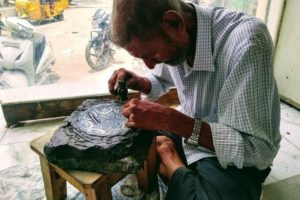 Bidriware is believed to have originated in the 14th century during the reign of the Bahamani sultans in Karnataka’s Bidar, from where the art spread to the entire Deccan. It is believed that Bidri art was brought to the Deccan by the Persians, by the followers of Khwaja Moinuddin Chisti. By day, the Persians propagated their religion, and by night they practiced the art in order to earn a livelihood in a foreign land.

Later, the art found patronage among the Nizams of Hyderabad who took special interest in inviting artists from Bidar to set up workshops in the city.

The metal artwork, to this day, is synonymous with royalty. The intricate silver motifs on the pieces shinning against the lustrous black metal are truly a prized possession for any craft enthusiast. So, what led to the decline of the art, which once had the entire royalty of the Deccan as its dutiful patrons?

ALSO READ:  'They Still Die In Labour Room With Pain'

A lost glory
There are only two major Bidri craftsmen today in Hyderabad. Sheik Omer Bin Ahmed Mujaheed, the owner of Gulistan Bidri Works, has been in the trade from the time of his grandfather. He is a seller and manufacturer who has 5-6 artisans working under him, most them aged above 60 years.

“My grandfather originally belonged to Bidar and as the art caught the fancy of the Nizam in Hyderabad, the sultan called him to the city and ordered that he work for the state. Enjoying the royal patronage, a lot of Bidri workers migrated from Karnataka and set up their units in Hyderabad. Buildings were given off for free and there was a constant demand for the art from the royalty. At one point, the city teemed with so many artisans that they had formed a society of their own called ‘Gulistan’,” Mujaheed recounts. 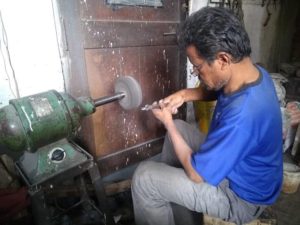 The Bidriware never adorned the homes of the middle class. The customers for Bidriware were a niche community – the rich and affluent who fancied eating from silver plates and decorating their homes with expensive art ware. Because of a steady demand for the pieces, the high cost of raw materials never bothered the craftsmen. However, this very same patronage by the elite led to the decline of the art once the state of Hyderabad was annexed to the Indian government.

“Even after Independence, till 1970s, Bidri workers earned enough to lead a lavish life. The artisans were, in fact, one of the most influential craftsmen in the city. But as governments switched and people’s aesthetic choices changed, the demand for Bidriware went south. Despite multiple appeals to the government, we are still grappling for financial aid to revive the business,” Mujaheed says.

Today, one of the primary factors that concern the workers is the rising cost of silver and the non-availability of soil which is used in making the mould. Bidri wares are made from a mixture of zinc and copper with a lavish coating of silver in its interiors. It’s a painstaking process that at times takes days to finish handcrafting a small piece of home décor. For the same reason, artisans say, it is unfair to price the products at a cheaper rate, to suit the needs of the present day market.

According to Khaleel Ahmed, owner of Khaleel crafts, the art work needs a huge investment in order to sell fine products in the market. But as the trade has no steady buyers, a huge investment can also mean a proportional loss in money.

“Silver is the costliest metal that goes into its making. It’s not just the cost of raw materials, but also the fact that very few artisans are left in the trade which is making the manufacturing difficult. Most of the workers here are above 60 years in age. They are the only ones left in the city who know the intricacies of Bidri art. Younger ones consider this a lacklustre profession as we cannot pay more than Rs 500 per worker a day and that’s not enough incentive to lure more people into the job,” Khaleel adds. 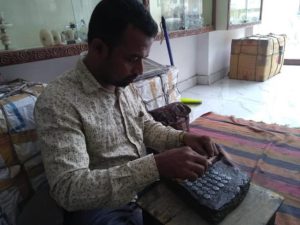 Even though the Telangana government is attempting to revive the dying art, artisans say that not enough is being done to fetch a suitable price for their products in the market.

“There are middlemen, to whom we sell the artifacts. They don’t do a fair trade as it is an open market with no standard pricing policy. The government must ensure a standard rate for our products and create a demand for the products at least in furnishing government offices. They can help us set up exhibitions or sell products in other states. Though it’s a family business, we are ready to impart the art to the younger generation. But as a saying in Urdu goes, no art would prosper as long as it doesn’t enjoy the patronage of the ruling machinery,” Mujaheed claims.

Adapting to present day aesthetics
During its heydays, Bidriware had silver chiselled in the shapes of flowers, leaves, poppy plants, human figures, Persian roses and even passages from the Holy Quran in the Arabic script. It used to be usually carved out on hookah pots, bowls, ornament boxes, earrings, trays and tables. But today, as there is a need for more compact products, the artwork is being replicated on USB drive covers, office stationery and even wall tiles!

According to Mujaheed, to bring down the prices of products, artisans are now resorting to screen printing, which can do the work of 50 workers at once without the use of silver. The difference in products is conspicuous to the eye of a craft enthusiast and Mujaheed vows that every customer is told about the difference at the time of purchase. But, the counterfeit Bidri products in the open market are a real challenge, he adds.

“Recently, I obtained a government order according to which I had to manufacture around 100 gift pieces for dignitaries visiting from around the country. I had less than a week in hand, and all I could do was to screen print the designs rather than handcrafting them. The work was finished quickly and I also could earn some quick money,” he says.

Both Khaleel and Mujaheed agree on a common factor: the emergence of the IT population and the slightly better rise in sales. 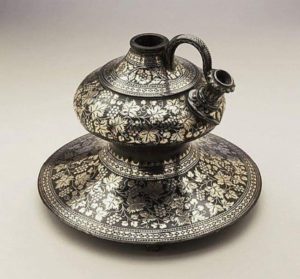 “We now get bulk orders from IT companies for small compact home décor items. But to cater to the new market, we have largely altered the designs. Also, intricate designs are difficult to be handcrafted in a short time. For example, the Phool Jaari design is now common because it takes less time and uses way less silver for manufacturing,” Khaleel says.

The way ahead to revive the Bidri artwork is long and arduous. Supporting the artisans through skill development and framing a pricing policy for their products will help boost this 850-year-old elegant art. Reiterating what Mujaheed had to tell this writer, “No art can prosper as long as it doesn’t enjoy the patronage of the ruling machinery”. #KhabarLive