Home #ExclusiveVideo Ghosts, Goblins, Gateways Of Golconda Fort In Hyderabad
Share on Facebook
Tweet on Twitter
The entrance and exit routes of the Golconda fort changed as many times its rulers. A centuries-old buried path, a walled up gateway and a secret passageway; these might be the perfect ingredients for a mystery if the location happens to be Golconda fort in Hyderabad.
Unfortunately, the reality is much more mundane. It is the fear of ghosts and goblins that led to the walling up of the southern entrance of the Qutb Shahi tombs complex. But the walled up entrance tells the story of how the Golconda fort evolved over time and how the topography of Hyderabad changed over centuries. 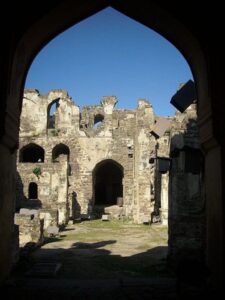 According to historian Robert Alam Simpkins, the Patancheru gateway (now closed) is a relic of earlier pathways from the fort. The first king of Qutb Shah dynasty who came to Golconda as a Tarafdar or Qiledar (fort keeper) looked to Bidar for advice and inspiration. He built the inner fortifications and the Safa Masjid and the old pathway led past the Langar-e-Faiz Athar (place for bountiful entertainment) towards Patancheru and beyond to Zaheerabad and Bidar. According to European travellers, every evening pulav used to be served to the needy near the tombs.
The third king Ibrahim Qutb Shah (1550-1580) under whom the fort got the current shape and structure threw an outer curtain of high and impregnable black granite and in the old pathway, he built a gateway which came to be known as Patancheru Darwaza. The gateway with a draw bridge over a moat had a masjid and a pool for ablutions. Now, people from the surrounding areas pray at the masjid while the pool is kept under lock and key.
The direction of Golconda or rather the entrance and exit changed once again when Muhammad Quli Qutb Shah began building Hyderabad to the East of the fort in 1591. The Patancheru Darwaza went into disuse, as did the southern entrance to Qutb Shahi tombs. The Qutb Shahi nobility had one overarching fear of ghosts.
If a doorway was used to take out a dead body for burial, then it would be closed so that the spirit would not find its way back. Sometimes they tunnelled through the wall to take out the body and later walled it up so that the ghost could not find its way back. And that perhaps explains why the southern entrance of the Qutb Shahi tombs complex was walled up to break the connection with the fort.
“Many of the structures inside the Qutb Shahi complex don’t have inscriptions and we have numbered them for documentation and conservation work,” says an official of Aga Khan Trust for Culture which is carrying out the conservation work at the site and on the walled up southern entrance. Above the walled up gateway is a small masjid with florid stucco work.
The topography of Golconda changed again when Aurangzeb’s army attacked and ransacked Hyderabad in 1656, the ruling king Abdullah Qutb Shah rushed back to the safety of Golconda from Hyderabad and stayed put there, as did his successor Abul Hasan Tana Shah.
Years later, the compass of Golconda changed when Aurangzeb’s victorious army marched through the Fateh Darwaza to conquer it in 1687. The doorway became the main passageway during the Nizam’s time. Now, the clock has turned full circle when most of the tourists enter through the Banjara Darwaza.
Just yards away from Patancheru Darwaza. It is known as seven tombs but there are dozens of monuments inside the Qutb Shahi tombs complex. Badi Baoli, Summer Palace, Hammam, a number of masjids both small and big, step wells, water channels and scattered graves are all there within the complex. #KhabarLive #hydnews
ALSO READ:  ‍How Urdu Poetry Takes A 'Paan Leaf' Out The Life of Leisure?