A legend in his lifetime, NTR breathed his last in his sleep, this day a quarter century ago.

With his demise, the country lost a colossus who dominated the world of Telugu films for about four decades and the political arena for over a decade at the regional and national level.

When Deve Gowda became the Prime Minister in 1996, the talk was that it would have been NTR occupying the seat, but for his sudden and untimely death. 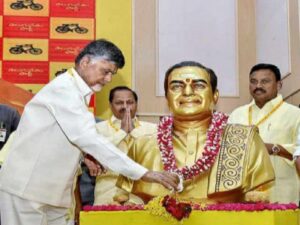 NTR, who found his true calling as a film artiste at 26 years of age, excelled in the art like no other. His first film in the leading role was the classic Shavukaru, released in 1950 and the last was Major Chandrakant (1993), a major box office hit. In the intervening years, NTR essayed a variety of roles in over 300 films of different genres and except for his debut film in which he played a minor role, he was the hero in each.

He was a rare talent producing many meaningful films of which he directed 16 starting with Sita Rama Kalyanam in 1960, a tour de force. NTR daringly played Ravana, the anti-hero, in the movie at a time he had already been deified as Srikrishna and Srirama.

His prowess as an all-rounder can be gauged from the fact that he was the producer, director, screenplay writer and costume designer – a veritable one-man army – of the film Daana Veera Suura Karna in which he also essayed the diverse characters of Krishna, Karna and Suyodhana appearing on screen for four hours of 4 hours and 17 minutes duration of the film, the longest ever Indian movie to date.

Often working 72 hours non-stop, wearing period costumes and heavy metal crowns, it’s incredible that he made the movie in 43 days, a feat no one can dare replicate. The movie released in 1977 was a smashing hit.

NTR chose to stay with the Telugu film industry of which he was the mainstay for four decades rejecting Hindi film offers from V. Shantaram and Nadiadwala. The latter offered him the role of Krishna in a Hindi movie tempting him with the highest remuneration ever for an Indian actor.

Of the movies he acted, nearly half of were blockbusters. At least 50 of his films are watched with tremendous interest even today, and at least 20 would be sure to be viewed by the people as long as Telugu films survive.

When he turned 60, at the height of his career, NTR gave up films and entered the political arena on March 28, 1982. He launched a political party and took on the till then, undefeated, Congress. He campaigned hard in his Chaitanya Ratham on dusty roads covering 35,000 miles, and rode to power in 1983 with a thumping majority. 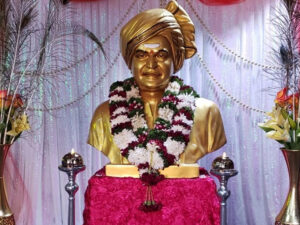 As Chief Minister, politics was a distraction for NTR. He had an abiding faith in dharma and that was the touchstone of his public policy. He was in a hurry to build a society free from social and economic injustice.

He tilted the social and political power in favour of the people belonging to the underprivileged and backward classes, giving voice to the voiceless. He awakened the weak and the poor who felt equal and confident like never before.

NTR unveiled scores of welfare schemes of which subsidised rice scheme, clothing for the poor and shelter for the marginalised sections stood out. He legislated equal right for women in property in 1984, a historic step to empower women. The Central Government followed his example after two decades.

NTR abolished village hereditary posts and created mandals to bring administration closer to the people. Realising that education is the driver of social change and economic progress, NTR laid emphasis on quality education.

Primary education in Telugu was his major concern and as one who knew the potential of cinema, his fertile mind ushered in video lessons for children, a pioneering effort. He established residential schools (gurukuls), a boon for the children of disadvantaged sections. He carried out diligent nation-wide search for persons of integrity and proven eminence to head the universities.

ALSO READ:  Why 'Doubling Income' To Distressed 'Farmers' Is A Distant Dream?

This is only a small list of his many path-breaking initiatives. 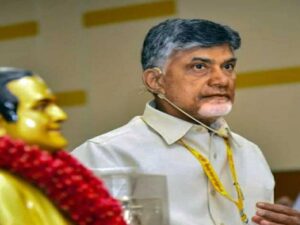 Ruthlessly honest, NTR expected his legislators to be clean. This created problems and he was overthrown. But he scripted perhaps the finest chapter in democracy by returning to power in 1984 in what has come to be known as the struggle for restoration of democracy.

NTR was not always right. He was obstinate sometimes. He was often too sure of himself. But his intentions were never suspect. His public life was an open book, the under song of which was Telugu pride and self-respect. His was a well lived life worthy of emulation.

‘Every man is guilty of all the good that he didn’t do,’ said Voltaire. NTR was not guilty of this. He accomplished a lot both in films and politics. No wonder then that NTR is fondly remembered even 25 years after his death.