The popular saying – ‘Behind every successful man, there is woman’, but for G Srijana, GVMC commissioner, the saying goes other way round. She credits her success as an IAS officer to the two wonderful men in her life — Her father and husband.

In her leadership, not only did she make Greater Vishakhapatnam Municipal Corporation as the best performing municipal corporation in the country, but many other things that  she is very proud of, one being hosting child friendly pushkaram, a first in the country, which has been recognized by the NHRC. 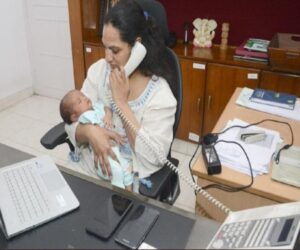 The dedication of this officer was the talk of the town when she resumed to work 20 days after giving birth to her son, just to serve during a crucial phase of the country — nation-wide Covid Induced lockdown. She is the first lady Commissioner to GVMC and the second lady commissioner of Vizag. But did you know she is a very emotional person in real life? Read on to know further about the officer as she talks to #KhabarLive about her childhood, marriage, satisfying achievements and more…

Growing up in different places
I was born in Tirupati. My father, Mr Balaramiah, is a retired IAS officer. Because of my father’s transferrable job, I grew up and studied in different places. I started from Karimnagar to Anantapur to Kadapa. Majorly it is Karimnagar, Hyderabad, Anantapur and Kadapa. After my Class X I was in Vijayawada, I took BiPC as I wanted to become a doctor. When I was about to join medicine, despite getting a seat, I decided not to get into medicine and joined BA psychology, followed by an MA in political science in UoH. At that point in time, my thinking was probably medicine will not suit me. I wanted to do much more than one subject. During my growing up years, I have been seeing my father dealing with many subjects. I felt there is a wider scope and there is a lot of learning. I felt my nature would suit to become an administrator more than a doctor.

My father is my inspiration
My father is my inspiration to become an administrator. I have been seeing him and I understood how a small gesture can really make a difference to people’s life. Even if it’s during disasters, how you could reach out to people and be of help, and bring in positivity and keeps avenues open, etc, these aspects made me feel administrative  services give that feel to flourish and be a change. Seeing my father and his colleagues around that difference they could make made me choose Civil services. Everyday people would come home with some land issue or pension issue and others. I would see people every day. I got the exposure to bureaucracy from early on.

Parents were particular about keeping peace
As a kid, I was never notorious. In fact my parents even had a doubt if I was okay as I would never play anything. I have a younger brother, I used to love taking care of him and I was a very calm kid. I had a very happy childhood. My parents were very particular about keeping peace. They were against hitting children and made it their policy. They gave me that environment of peace and calm always. When I was very young, my father used to read out stories for us. That gave me an interest to start reading books. That habit of reading, prioritizing to know the world through books consciously inculcated into us. When I think back it was because of my dad and mom, Sugunaseela. Even until 4 and 5th class they used to read out. That gave me interest to read and explore. 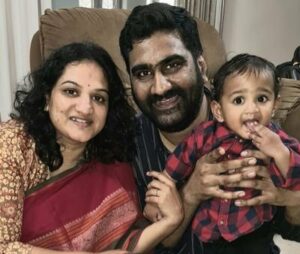 Husband encouraged me to not give up on my dreams
I finished my MA in 2007, I started writing UPSC in 2008 at the same time when I registered for my PhD. It took me four attempts to crack Civils. I would clear Prelims and Mains but never to the service. It has been quite a challenge. When I started out, I started with two options, psychology and political science. After three attempts, I decided to step back and unlearn a lot of things and start afresh. Meanwhile, I got married and attempted Group1 exams just to give that self confidence. I cleared that exam and it gave me a lot of confidence. In my last attempt, my husband, Ravi Teja, encouraged me to not give up on my dreams. In 2012, I attempted UPSC again and I cleared that attempt. I ranked 44 in that attempt. One of the best things is I scored highest in the interview.

Positing to home cadre
The year when I cracked Civils was very fortunately for me, there were two vacancies for the insiders. I was 2nd in the state. I was too fortunate to have two vacancies and got into my home cadre. My district training was in Krishna. We were the first batch when Prime Minister started Assistant Secretaries for trainees. My job was assistant secretary in petroleum industry. Later I became sub collector Vijayawada, after a year, I was posted joint collector Vizag and then Commissioner Vizag.

ALSO READ:  Muslim Girls Less Likely To Drop Out Of School Than Boys In Higher Education

Being 2nd lady commissioner to Vizag
When I was sub collector Vijayawada, it was one of the crucial moments for me. That is when the capital has been shifted to Vijayawada from Hyderabad. I had a difficult but great time then. I would say I was one of the fortunate officers. In my shortest tenure of 11 months, I have done 65 CM programmes just because of the fact of being at the capital. That familiarity gave me a chance of becoming joint collector Vizag. Vizag is holistically good revenue district, you can learn a lot of things. That kind of an exposure gave me a lot of confidence. Always as an officer I tried to maintain neutrality. I am the second lady commissioner to Vizag but first to GVMC. 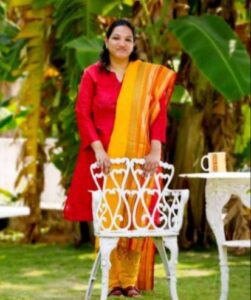 Two wonderful men of my life
I’m fortunate to have two wonderful men in my life — my father and my husband — who never discriminated how to be a man or a woman. Both of them are equally clear in their mind that we are all humans. I never had to think or struggle to manage home and work. Everybody in the house understands my job. As parents my husband and I are equally responsible to take care of the kid. I should say my husband takes more care of my son than me.

Precious pregnancy, job
I never had plans to take 6 months off after delivery from the beginning. I wanted to get back whenever I feel fit physically. But I never expected that lockdown would come up on all of us suddenly and we would be in a war like situation. I felt my being there was of most important use. If we are not there at time, we don’t have to be there anytime. I was physically ready and I had my family around me, thanks to lockdown. They supported my decision to get back to work within 20 days of delivery. They gave me that confidence.  I had a precious pregnancy and I had struggled 7 years to get this job, so both are equal to me. If I had to choose one between both, I would have been stressed.

Hosting first child-friendly pushkaram
In every job there were many emotional moments. When I was handling Krishna Pushkaram, I wanted it to be child friendly. I didn’t want to watch a film where a child is lost in a mela. That kind of stress should not be there for any child or any elderly person. This initiative was recognized by the National Child Rights Commission. It was declared the first child friendly pushkaram in the country. That was a very satisfying moment for me. As Joint Collector, many people told me that I could protect government land. That really changed me and inspired me to do more. As a commissioner there are many. Even if I get a garbage bin cleared, it is satisfactory. The most biggest satisfaction is through my journey is give houses to two lakh people.

Marriage
My marriage was my choice. I met him in the Central University. We were friends for quite some time. We got married in 2011. My dad knew him from the beginning and he liked him. There was a bit of struggle at home as it was the first love marriage in the family, but they understood. My husband, who is an advocate in AP High Court, was a positive influence on me. After I got married, I was at peace mentally, financially and in all ways. Because of his support I could crack my Civils. Having a husband who doesn’t get insecured with our position is very important. My husband is that. He is happy and proud of what I am. All this comes with respect between the both of us.

Describe yourself in a sentence: A conflict-free, peace loving, curious person. I don’t like people around me being unhappy. I try to deal with it and I’m more of a crisis manager.

Favourite holiday destination: My husband and I make it a point to go to any country every year. Of all the places I had seen, I really liked London.

How to spend your leisure period: Before the child, I used to read a lot. I love music and watching movies. Earlier, we used to go for movies every week. After the child, things change.

How do you deal with anger: I don’t really get angry often. If I don’t like something, I point out immediately and I don’t pile up my anger.

What are you most inspired of: The ability and hope that we could give to people. That feeling of I am of certain hope to somebody keeps me driving.

Something people don’t know about you: I’m very emotional. I cry a lot. I don’t see it as a sign of weekness. My dad says it but I don’t agree. It’s a sign of expression I believe.

A lesson you learnt it the hard way: You need to have patience and perseverance to get what you want. #KhabarLive #hydnews