Muslims came down heavily on the Telangana State Waqf Board for failing to defend the Waqf property worth over one lakh crore rupees in the Supreme Court.

In a major setback to the Telangana Waqf Board, the Apex court upheld that, “Land dedicated to religious and pious purpose is not immune from being vested in the state.

While upholding the ownership of the Telangana government over a land extending over 1654 acres in Hyderabad that was a waqf land belonging to Dragah Hussian Shah Wali situated at Manikonda. The court ruling has far-reaching consequences on waqf properties spread all over India.

It is to be noted that the Board earlier won all the trials from tribunals in  Telangana High Court related to this property, which was undone in Supreme Court due to a huge conspiracy hatched by state government and dubious dealing of Telangana Waqf Board. 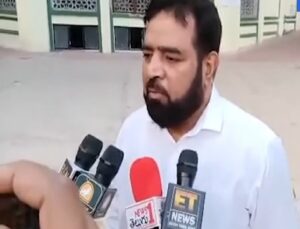 Speaking with #KhabarLive, Osman Al Hajri, a social activist and Congress leader put the entire blame on the Telangana state Waqf board for this fiasco. Waqf officials’ lackluster approach  in defending the case of Dragah Hussian Shah Wali Waqf Land of Manikonda before the Supreme Court has led to loss of the case which has far -reaching consequences on the  Waqf properties spread all over India, he said.

Arguably, it was a watertight case that won all the trials from tribunals to the high court of Telangana which has received a severe blow in the Supreme Court. It is said an honest Tahsildar who provided all the evidence and defended the case in High court was transferred when the case came up for hearing in the Supreme Court.

Despite having all the records and irrefutable evidence to establish the claim, the Board failed to effectively defend it in the court. Congress leader Al Hajri said this was a clear case of “nexus between the TRS government and the Waqf board officials.

He regretted that the case in the Supreme Court was not pursued in the same way that it was in Telangana. Adding that “honest officials” were notably absent when it came to dealing with the case properly in the   Apex Court   as opposed to what was visible in Telangana’s local courts. This proves that no meaningful effort has been used to obtain the case in the board’s favour.

He blamed the entire staff of the Waqf Board for the catastrophe in the Supreme Court, saying it was a clear case of the TRS government conspiring against Muslims and waqf properties designed for their welfare.

This is one of the most high-profile waqf board disputes, involving properties worth more than a lakh crore rupees.

Despite having sufficient documentation and solid proof, the  Waqf  board, like Mantaqab, has lost the case, while the grabbers leave the court banging the rap, “stated Osaman Al Hajri.

I am fervently urging the Muslim community in general, and Muslim groups in particular to protest peacefully against the Waqf Board’s failure to defend the community’s valuable waqf holdings, while the state government shows no sign of acting in the community’s interests. He also asked political parties, regardless of party affiliation to highlight the issue in the assembly and Parliament. According to Osman Al Hajri, the question of waqf property is not an individual matter; rather, the entire Community will suffer a loss of monumental proportions.

It is to mention that the Supreme Court observed while setting aside the action of the Andhra Pradesh Wakf Board that declared land measuring 1654 acres and 32 guntas as wakf property. The bench of justices Hemant Gupta and V Ramasubramanian said, “The land dedicated for pious and religious purpose is not immune from its vesting with the State. It was the Sovereign who had granted the right to do service to Dargah.

The decision came as a big relief for the Telangana government, as the state had subsequently leased out the land for setting up a university, township and other institutions of repute. The state government had appealed to the Supreme Court after losing out before the Andhra Pradesh high court in April 2012. The state had claimed before the high court that as a result of the HC ruling, it would be required to pay a huge sum running into thousands of crores of rupees as compensation to the Telangana Wakf Board.

Now the Supreme Court ruling may adversely affect the other nozul (inaami) lands spread in thousands of acres in states of Telangana, Karnataka, Andhra Pradesh and Maharashtra. #KhabarLive #hydnews