As the Guntur chillis’ got competition, 29 other districts in India chose chillis as their signature product too. And in taste and strongness it stands numero uno. 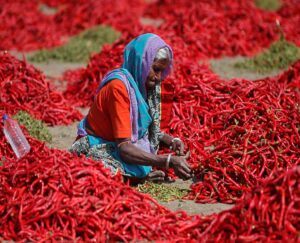 Order any Szechuan dish in China and the odds are that its famously spicy flavour comes from the Guntur chilli. China is the world’s second-largest producer of chillies, yet since 2017-18 it has grown dependent on India, becoming the largest exporter of our red chillies.

The Chinese prefer India’s spicier and more pungent chilli to their own. Neither the brief freeze in exports and nor the disruption in global logistics chains because of Covid-19 could hamper China’s appetite for Indian chillis doubling in recent years, thanks to a new land-sea corridor and a new export protocol signed by the two governments.

Under the One District One Product Initiative, Guntur, Andhra Pradesh declared its famous chilli as its signature product, hoping to leverage resources to promote its produce globally – 29 other districts followed suit, each declaring chillies their unique, signature product and setting the stage for a nationwide chilli faceoff. 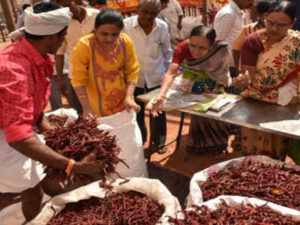 Launched in 2018, India’s ODOP (One District One Product) Initiative played a key role in opening up domestic Indian markets to China. Aimed at promoting ‘balanced regional development across all the districts of the country,’ the move has helped Indian producers discover new markets for their products. Under the initiative, the director-general of foreign trade, Ministry of Commerce worked to create district export hubs that would push unique, local, and differentiated products globally. Each district came up with its unique, signature product and the programme would help them identify and develop unique, geographically indicated district-specific products, and promote them in global markets. Kishtwar in Jammu and Kashmir chose saffron, Virudhanagar in Tamil Nadu chose its famous Sivakasi fireworks, and so on.

Under Aatmanirbhar Bharat programme, the Ministry of Commerce promoted 106 products across 103 districts in the initial phase. The USP of the initiative was that each district would identify its unique differentiator and develop the capacity to become a world leader in production and export of that product. Guntur, as India’s largest exporter of chilli, picked the obvious. 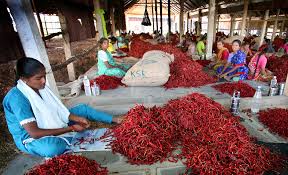 Chili, a New World plant, is said to have come to India with Vasco da Gama in Calicut in 1498. Initially traded, it faced low prices and a disinterested Indian audience. A hundred years later, only three varieties of chilli had made it as far as Goa. Indians may have been slow initial adopters of the chilli, but once it found their fancy, diffusion was rapid. India today is the world’s largest producer and exporter of chilli and is home to almost two dozen varieties.

Almost 40 per cent of India’s chilli production comes from Andhra Pradesh, which is home to the Guntur Mirchi Yard, Asia’s largest chilli trading market. In 2019-20, Guntur district of Andhra Pradesh alone accounted for almost $640 million dollars worth of chilli exports, half of India’s total exports which amounted to Rs 8,430 crore (almost $1.1 billion) in 2020-21. The last two years have seen exports of chilli grow by over 25 per cent with over 610 thousand tons being exported.

However, the chilli is not unique to Guntur. On the initial list of 103 approved districts, chilli ended up being the signature product of two other districts too – Haveri, Karnataka with its Bydagi chilli, and Siaha, Mizoram with its Mizo bird eye chilli.

ALSO READ:  NEET 2021 Rank Predictor - Here's How It Can Help You Make The Right Career Choices

Egged on by Guntur’s success, a dozen other districts listed their chilli cultivars in the final ODOP list, threatening to diffuse the uniqueness of Guntur’s brand. These ranged from Tawang and Shi Yomi in Arunachal Pradesh, to Tinsukia (home to the fiery Bhut Jolokia) in Assam, to Khargone in Maharashtra and Kamjong in Manipur. Not to be outdone, two districts in neighbouring Telangana – Bhadradri Kothagudem and Mulugu – also chose to compete with the Guntur chilli. There was little to distinguish Telangana’s chilis from those of Andhra Pradesh’s. Telangana’s largest producer of chillies, the Khammam district, was missing from the list, being allotted iron ore as its signature product instead.

Chilis produced in the Northeast are different from that used in everyday cuisine in other parts of the country. Niche chilli cultivars include the bhut jolokia, which is one of the spiciest chilis known in the world. While they have managed to carve a distinct identity for themselves, their production is tiny compared to that of AP and Telangana. The entire state of Nagaland accounted for less than 1 per cent of India’s total chilli production, while Arunachal was negligible.

Expecting a district like Shi Yomi in Arunachal Pradesh with a population of fewer than 15,000 people to compete with the resources of Guntur, which has a population of over 5 million, was unreasonable. With minimal infrastructure, an important question to ask is how these remote districts in the Northeast plan to bring their produce to global markets.

A diffusion of the programme 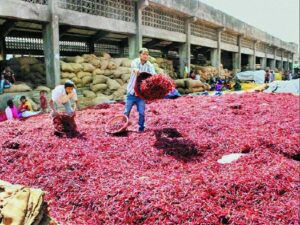 To further complicate matters, the success of the initiative has led to multiple copycat programmes being launched by a host of government bodies. States such as Uttar Pradesh, not wishing to be left behind, launched their own versions such as the ODOP-UP Scheme. The Ministry of Food Processing Industries (MoFPI) launched a similar One District One Food Product (ODOFP) initiative under the PM Formalisation of Micro Food Processing Enterprises Scheme promoting Kulgam district’s Kashmiri Lal Mirch. It also went on to declare chilli the signature product of a total of 29 districts, including UP’s Varanasi, and Deoria.

All this draws attention to a lack of conceptual clarity and haphazard implementation of the initiative. While there are significant differences between some of the districts’ chilli products and each variety has its own uses and derivative products, the proliferation of districts climbing onto the chilli bandwagon eventually lead to a diffusion of the ODOP programme’s intent. It is difficult to build a geographically indicated brand, when similar products are promoted across the country and even harder to prioritise between districts offering competing versions of the same product.