Khursheed Jah Devdi in Hussaini Alam is a beautiful two-story structure in the old city, where Paigah royals once lived. Considered one of the best examples of Palladian architecture by heritage experts, the mansion has big pillars and European design floors, which were decorated with carpets. 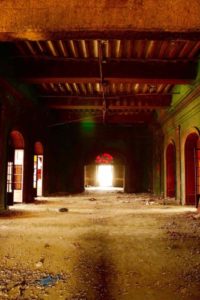 But today, its doors and windows are broken, flooring damaged and walls crumbling. The 150-year-old heritage monument is in ruins,

thanks to the ignorance and neglect of authorities.

The usual tourist route while visiting Hyderabad borders around Salar Jung Museum, Charminar, Chowmahalla Palace, Golkonda Fort, Qutb Shahi Tombs, Makkah Masjid et al. But Hyderabad, like any other ancient city, is a repository of long forgotten places or architecture which were once an epitome of historic significance, but now lie unnoticed and unseen. 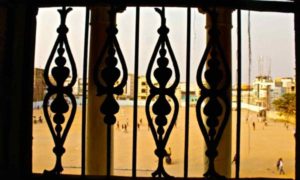 Founded in 1591, the city is a haven of historical architecture – especially considering the legacy of its rulers. On my very first visit, I was keen on finding one such architectural specimen built between 1880-90 by the Paigha nobles somewhere in the Old City of Hyderabad.

Our very courteous and helpful local guide – who was also driving us in his auto-rickshaw – couldn’t remember any place by the name of Khursheed Jah Baradari. 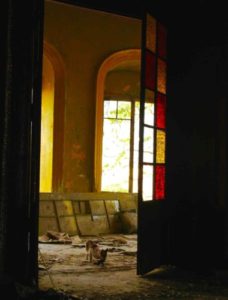 Its interiors were once adorned with expensive carpets and exclusive chandeliers. The gardens blossomed with flowers and fountains made the ambience livelier. A marvellous piece of European style architecture, the Khursheed Jah Devdi in Hussaini Alam, once home to the Paigah nobles, now lies in ruins.

Broken doors and windows, wrecked flooring and burrowed walls greet the visitors. Remnants are regularly carried away by children as a novelty. “We have not seen officials visiting the palace at any point of time. Instead, recognising its heritage aspect, many film units descend here for shooting,” Minhaj, a local shopkeeper, says. 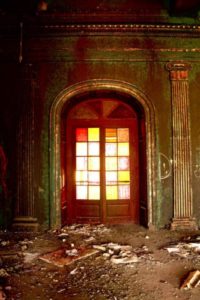 Paigah nobel Khursheed Jah Bahadur inherited the palace from his ancestors and stayed here. The palace was full of imported furniture, chandeliers and paintings. Woodwork and glass facades were the other features of the palace. The palace also bears resemblance to the British Residency at Koti. 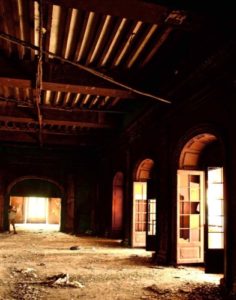 “It was constructed by Paigah noble Nawab Fakhruddin, who built several other palaces in the city including the Iqbal-ul-Daula Devdi and Jahanuma Devdi. Artisans from European countries completed the structure,” explains M.A. Qayyum, former Assistant Director, Department of Archaeology and Museums.

ALSO READ:  'Custodial Killings' Are An Alibi For Failure Of Governance In Telangana

A big garden and stable was part of the palace. The water to the palace was channelled from Mir Alam Tank by a special line which also supplied water to other royal palaces.

Though it is listed as a heritage monument not much has been done for its upkeep. A college functioned in the palace till it was shifted out for the fear that the building might collapse. “The government is not sincere in the upkeep of heritage monuments. To arrest dilapidation of the palace, at least temporary repairs should be taken up,” feels P. Anuradha Reddy, INTACH member.

Once he realised where it was, he said, “Now I remember the place. A foreign tourist asked me to drop him here a few years back and spent an entire day taking notes of the interiors of the palace. I had to keep him company since the neighbourhood kids were making a bee-line to see a white man roaming around inside this dilapidated building. But no one visits this place now. Everyone prefers to go to the nearby car museum instead.” 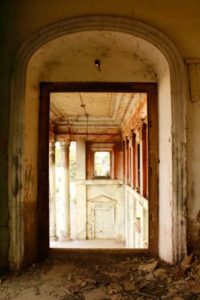 The residence of Paigah noble Khursheed Jah Bahadur in Hussaini Alam is a two-storey mansion with exquisite European architecture. As you enter the mansion – which is also known as a devdi or a lord’s house – you get a sense of its long lost glory.

Khursheed Jah Bahadur, incidentally, is the maternal grandson of the third Nizam of Hyderabad. Once adorned with chandeliers, expensive carpets, colourful floor patterns and a blossoming garden at the front with a fountain, it now stands forlorn. There are eight giant pillars at the entrance. While the interiors are in a pitiful condition, the staircase leading to the first floor looks fragile at first glance.

But your apprehension fades away once you step inside. The mystic glow that filters in through the stained glass windows almost eclipses the sight of bird feathers and shards of broken glass scattered all over the floor. Almost, that is. As I stood there, in the midst of the debris, I could hear the cheering voices of kids playing cricket outside in the once royal garden of Paigah Khursheed Jah Bahadur. 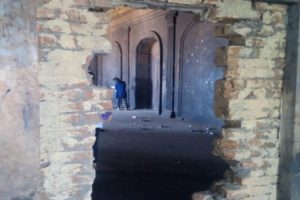 There is little clarity today on who is responsible for the maintenance of the monument. It was reported that the municipality banned its use and department of archaeology listed it as heritage building, but the concerned officials do not take up any repairs. The building was considered a Grade-3 heritage structure by the Hyderabad Metropolitan Development Authority. However, in 2015, the Telangana government dropped Regulation 13 of the Hyderabad Metropolitan Development Authority, removing the legal protection for the over 150 listed heritage buildings, including Khursheed Jah Devdi.

“The present government had made many promises during the election to protect the heritage of the state. But after the scrapping of Regulation 13, people can damage the heritage and get away by paying a small fine. This was a bad decision by the government,” says heritage expert Mohammad Safiullah.

While locals use the front part of Khursheed Jah Devdi as a playground, the back was attached to an educational institution until recently. “The school has been vacated as the condition of the building is worsening. The structure can fall at any time,” says Anuradha. Despite this, she says, the monument is frequently used for film shoots. Filmmakers modify the structure as they want, including breaking down doors and painting on walls. They also take heavy equipment to the first floor, which could further damage the already fragile structure. 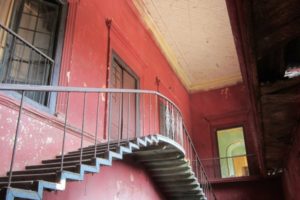 “There was a shoot going on a few days ago. They broke two doors to suit the movie sets, causing serious damage to the structure,” says Noorjahan, whose family has been staying on the ground floor as caretakers of the building for over 60 years. While activists have approached GMHC to stop such shoots, they say they’re not in charge. “We don’t know who gives them permission. The monument has been ruined because of this,” says Anuradha.

Khursheed Jah Devdi has the potential to become one of the finest tourist places in Hyderabad and add to the state economy – only if the crisis facing heritage monuments doesn’t dismantle it first.

The palace can still be restored if it gets its due attention from the government. For its architectural grandeur alone, it holds the potential to become one of the sought after heritage spots of Hyderabad. #KhabarLive