This 150-year-old rocky structure is likely to be pulled down soon as the construction for a cinema complex is going on the site near Lakdi-ka-Pul in Hyderabad. It is neither stunning nor does it stand out of the landscape. But for millions of commuters of MMTS and vehicle-owners using the Lakdi-ka-Pul road it is an unmissable landmark.

The raise on a hill, with higgledy-piggledy arranged rocks, and on it, perched like a flagpole is the structure built of stones which is called Tipu’s Lookout.

A few days ago, when some trekkers climbed up the hillock from Lakdi-ka-Pul MMTS station they were in for a shock as the quaint structure bore numbers in red with a construction work going on apace on the other side. 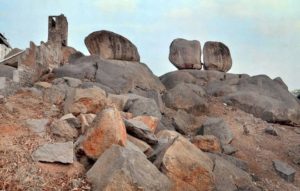 “They are making a cinema complex according to the workers there. They cut off all vegetation and all of the small rocks broken into pieces. The larger ones have been marked with numbers,” says Harsha D. who went with his friends to check out the latest development.

Even the largest rock has number 42 circled in red.

This is not the first time the structure has been under threat.

It is surrounded by a hospital, and office of a religious organisation and a petrol filling station.

But, now with the appearance of fresh numbers, the fate of the rocky structure appears sealed. 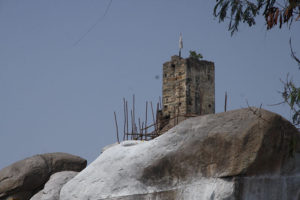 “It was not a protected site. In any case, after the removal of Regulation 13 of Hyderabad Urban Development Authority Zoning Regulations, 1981, there is no protection for any heritage site,” says Frauke Quader of Society to Save Rocks.

Tipu’s Lookout was built by Tipu Khan Bahadur nearly 150 years ago as a watchtower for keeping an eye on any enemy trying to spring a surprise on the tented city near Fateh Maidan.

“Because it was a public structure, the name has remained but after the city became big and its topography changed, the lookout tower became redundant and was abandoned. But that doesn’t mean it should be pulled down. It is part of Hyderabad history,” says Wajahat Ahmed Khan, the great grandson of Tipu Khan, sitting inside his house in Vidyanagar.

Though the name Tipu Khan is virtually unknown despite his philanthropy in constructing the Tipu Khan Serai, Tipu Khan Bridge and half-a-dozen masjids scattered across the city, he is a familiar face in old Hyderabad albums with the photograph of Nizam VI Mahbub Ali Khan. 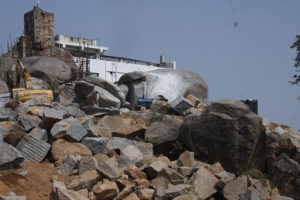 Standing in one corner is the big beefy man with walrus moustache with riding boots with a proud look on his face.

ALSO READ:  Why TRS 'Afraid' Of BJP's Rise In Telangana?

Tipu Khan’s fate is inexorably linked to that of his Mahbub Ali Khan Nizam VI.

An aide who was a constant companion to the Nizam, his fate turned when his master died suddenly at the Falaknuma Palace. The courtiers and aides got divided into two camps.

While one camp with Tipu Khan and other nobles backed Salabat Jah, the other camp backed Osman Jah. In the power struggle that ensued, Osman Jah camp up on top with the result that all backers of Salabat Jah faced trouble. 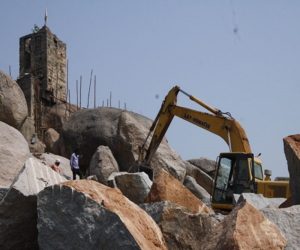 Though he had built Tipu Khan Serai it became popular as Nampally Serai.

Now, with the imminent erasure of Tipu’s Lookout, one more landmark created by one of the Hyderabad’s benefactor is set to become history.#KhabarLive