Telangana Elections bring in plenty of work to weavers of this textile town. Come elections, the powerloom weavers of Sircilla textile town have their hands full, looms busy, and later pockets full producing a variety of election campaign materials for all the political parties of the country.

Any election, any political party, any contestant and any State, the election material is produced only in Sircilla town because of its quality and affordable prices. Weavers are busy producing flags, banners, caps, shawls and other poll-related paraphernalia for the TRS, Congress, BJP, YSRCP, BSP and others. 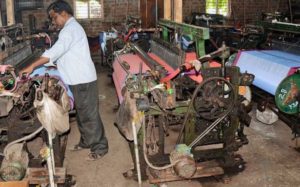 The powerloom weavers, who were in a happy spot given the bulk orders by the State government to weave Bathukamma saris and school uniforms, are delighted with the general election as they have hands full of work producing election material for all political parties and contestants.

ALSO READ:  #BadiKhabar: Will Bihar’s Communal Pot Be Kept On The Boil Till Next Elections?

Five months ago, the weavers had secured bulk orders for producing poll material for the Assembly elections in Telangana and had done a business of over ₹3 crore. Now, Parliament elections have come as a boon to the weavers as they have secured orders for more than ₹5 crore.

It all started in 1978 with screen printing of party flags. With the advancement of technology, the Sircilla textile industry had started producing all types of election material such as caps, shawls, banners, flags, festoons etc. They charge anywhere between ₹50 to ₹500 per banner depending on its size. Printed shawls and flags come at ₹20 to ₹50 a piece, festoons at ₹20 to ₹30, while the VIP shawls cost ₹100 per piece.

The election season is hay-making time for the powerloom weavers and their womenfolk. Around 500 persons, including weavers would be actively involved in the business of producing election material. The womenfolk, who are otherwise involved in the beedi industry, shift to campaign material production side-by, stitching shawls, caps and flags and their packages. 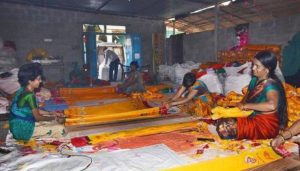 “Election time is happy days for the weavers and the womenfolk as we get plenty of work to make quick money. I regularly roll beedies to add to the family income. But during elections, I shift to election material production as I would get daily ₹250 against ₹90 to ₹100 I make per day by rolling 1,000 beedies,” said Gagerla Kavalathi, a beedi worker.

D. Murali, who produces election material, said there were good, bulk orders from all political parties from Telangana and Andhra Pradesh. Declining to disclose the worth of the orders, he said he was employing 25 persons in his firm. One can stitch up the rest. #KhabarLive