During a day-long food tour in Hyderabad, go ahead and revel in the sights, sounds, and scents that Andhra cuisine brings the mood back with my tiredness and hectic schedules. They say good things come to those who wait.

But by the time the third Uber driver cancelled the ride after agreeing to pick us up from Hyderabad’s Somajiguda, it seemed there was little good headed our way. Jonty Rajagopalan, the founder of Detours India and our guide-cum-chaperone for the day, who had summoned us to this side of town, chose to remedy Puneet and my obvious impotence in the matter by taking charge and hailing a good ol’ autorickshaw. “Monda Market,” she told the driver, and we were off. 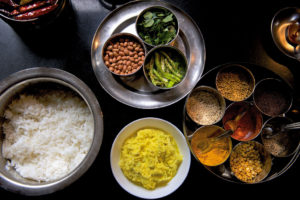 In retrospect, this mild inconvenience was the only thing that went wrong that day—and I am really nitpicking here. As the morning metamorphosed into the afternoon, Jonty’s promised ‘The Andhra Spice Detour’ progressed like a line graph bound straight for the skies. By the end of it, I had tasted some scrumptious nosh; relished the sights, smells and sounds of a marketplace; and perfectly summed up a food-filled week-long sojourn to Hyderabad.

And it all began with a question: “Jonty, what sets Andhra cuisine apart?”

These words echoed in the auto racing towards Secunderabad’s Shivaji Nagar, home to the market. As the city’s suburbs give way to time-worn cantonment buildings, Puneet unpacked his DSLR to document the transition. Jonty had, in the meanwhile, fully understood the context of my question. She knew I did not need to be told how Andhra food differed from Hyderabadi or Nizami fare, which I had already sampled even in the most obscure of Char Minar’s bylanes. At the same time, she knew that in my tryst with mainstream ‘Telugu’ restaurants I had been fed commodified gongura mamsams and pulaos disguised as biryanis. I was asking her about the real dishes of this land, born out of its unique geography and one-of-a-kind culture.

“I’d say it is spicier and more sour than any other cuisine. In fact, at a basic level, it is sour food.” 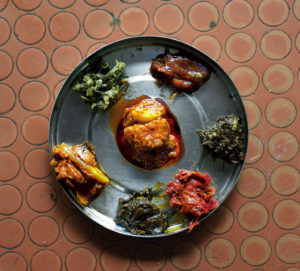 But where does this sourness come from? As it turns out, a bit from nature and a bit from human nature. Jonty told us in an impromptu geography and history lesson: after the Portuguese brought chillies to India in the 15th century, they began to grow quite well in the Eastern Ghats (that run through the region) because of its warm climate and abundance of rivers and deltas. Soon enough, chillies became a part of the local diet (especially because of their ability to help counter heat), but would make people sweat incessantly, thus losing salts from their bodies. Because of its high amount of salt, consuming sour food became an effective solution to this problem. Of course, this may be just one of the many answers to my question, but one thing is certain: Andhra-ites have a close affinity with the sour taste profile.

“Thoda aagey jaake uss phool vaale ke paas rokna” (“Stop at the flower seller a little ahead”)— Jonty communicated this to the driver and, effectively, announced our arrival at Monda Market. I stared right at the complex and felt the rest of the cityscape pale in comparison. Jonty said, “As you’ll see at this place, Andhra-ites celebrate their vegetables, chillies and lentils. In fact, they barely ever consume them as they are, but more so as pachadis (like chutneys, but eaten with rice), podis (powder) and pickles. I’ll explain these better when we swing by a Swagruha shop a little later.”

Inside, the marketplace was such a kaleidoscope of vegetables that some varieties would have even baffled an olericulturist. At first I was surrounded by rows and rows of pumpkins hung by shopkeepers that Jonty told me were meant to fend off demons. As I turned away from their incriminating gaze, we stumbled upon the far more inviting tamarind, which I know to be a prominent ingredient in Andhra cooking. Competent both as a souring and a cooling agent, an old wives’ tale goes that you could get a certain rash if you don’t include the vegetable in your diet! A little ahead I found gongura, famous for its tang, lying next to the milder chukka kura (spinach dock). A ‘sour triad’ of sorts was completed by dosakaya, a native Indian yellow cucumber, which I initially mistook for a tiny watermelon. Jonty insisted that I try the mango ginger (“it’s one of the earliest batches of the season, so it will be quite fresh”). Forgetting all about its pungency, I bit into it like it was an apple. Needless to say, it really took the ginger out of me.

At a little distance, a horde of drumbeats resounded that immediately caught my attention. Jonty and I (Puneet was on his own) rushed to the source, and realised that the day’s Bonalu festivities had begun. The festival, meant to worship goddess Mahakali, involves food offerings, which explained its celebration at Monda Market. A daawat involving upma and mutton was also being prepared somewhere nearby. 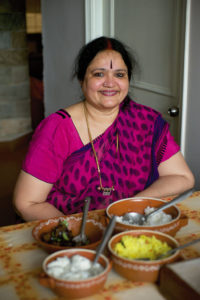 Though many of the vegetables—such as cabbage, baby corn, beans and cauliflower—sold there would have never been found at a similar market a few centuries ago, Jonty pointed out how gourds (keep an eye out for the sizeable snake gourd), which are mostly constituted of water, have sustained the region for centuries. Moringa leaves, considered a prized aphrodisiac in the Western world, were ubiquitous at Monda. The nomenclature associated with the Telugu name for potato (bangala dumpa, meant to convey its migration to the region from Bengal) was an interesting snippet of information that I was glad to have received. And, finally, as we passed by the papad and fryum shops, a vendor sold the delicious arisallu (rice flour deep fried in ghee and jaggery) for `20 a pop, which I savoured whilst swallowing a guilt pang.

After a visit to Monda, some Hyderabadis would head home and begin preparing their podis and pachadis. Most, however, would drop by a Swagruha (literally, ‘our home’). The store’s concept is attributed to a woman called Chagarlamudi Vijayakumari, who launched Swagruha Foods in 1991 in Vijayawada with a simple goal: to make home-style authentic Andhra food, especially preserves and sweets, accessible for everyone.

From the second we stepped into Sri Vijaya Swagruha Foods, located in Hyderabad’s Ameerpet locality, I was reminded of Lijjat Papad, the popular Mumbai-based cooperative that has over 40,000 women manufacturing various fast-moving consumer goods. Jonty directed my attention to a sweet called pootharekulu, a delicate delicacy made from ghee and sugar. Originating in the West Godavari district, it has a unique paper-thin outer layer with an addictive mouthfeel that made me sample two pieces.

Next were the pachadis, which unlike chutneys are conventionally eaten—sometimes solely—with rice and ghee. Here, too, geography played a major role: the Krishna Godavari Basin made the region into a rice bowl, so people based the cuisine around the cereal. Popular ingredients such as coconut, tamarind, gongura and karivepaku (curry leaves) are often made into pachadis. Podis, in powdered form, are the ones I was most familiar with. I ended up purchasing quite a lot of idli podis (made with ground dry spices), a staple at my home in Delhi. Podis last longer because of their powdered form, but be wary of them turning rancid. Finally, I came to pickles—Swagruha’s biggest sell. Mamidi thurumu (mango-grated curry leaf) and red chilli gongura were two that particularly caught my fancy. All pickle permutations and combinations were impressive, and reminiscing about the variety of vegetables I saw at Monda, it was safe to say an entire sub-cuisine of Andhra food had been created at this Swagruha, where achar and chutneys are not considered accompaniments, but the real deal. 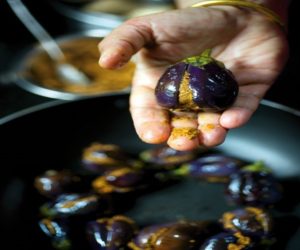 And, yet, my experience still lacked the perfect, gongura-leaf-on-top, ending: an actual experience of eating Andhra fare in its most authentic garb. For that, it was on to Begumpet to the kitchen of the graceful Usha Naresh, where all these elements that had teased my senses would come together into a hearty, unforgettable meal.

Sometimes, you can tell how good a chef is going to be based on how clean and organised they keep their kitchen. Usha’s had more surfaces where I could see my reflection clearly than a room of mirrors. She was amicable and smiley as she began cooking what Jonty called “typical Andhra dishes”, which must not be misunderstood to mean ‘easy-to-cook dishes’, for heavens knows how difficult it was for me to keep track of the recipe barely a few minutes in.

As she dipped the dosakaya in sesame oil and prepared a masala consisting of mustard powder, chilli powder and salt, the kitchen was filled with inviting aromas. Soaked in the masalas for just the right amount of time—so that there was neither too much acidity nor was it overly bitter—the resultant dosakaya avakaya (yellow cucumber pickle) was a tangy treat best complemented with curd rice, but also the bendakaya vepudu (okra fry) that had a delicious but mild flavour. I still remember how it crackled on the stove while Usha, as if she had grown multiple arms, navigated from one dish to another. 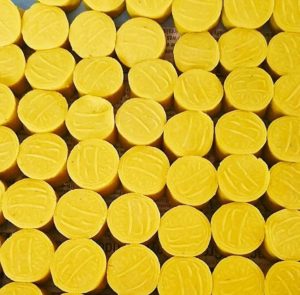 As for gongura pachadi, which eventually became a thick brownish paste that I couldn’t get enough of, especially when eaten with pulihora (Sona Masuri rice, a flavourful medium-grain rice variety, with tamarind), it was exciting to watch the leaves slowly lose their contours, as if melting, in a mixture of sesame seeds, garlic and oil, till the delicious sourness of the leaves was all that remained. Gutti vankaya, the ultimate dish of our meal, had Usha once again spin her magic—stuffing an array of ingredients in aubergine shells, which I then stuffed in my mouth.

It was barely mid-afternoon when ‘The Andhra Spice Detour’ came to an end. However, within a few hours, I seemed to have very briefly glanced over thousands of years of sociological, geographical and cultural processes that have shaped a cuisine. It had been a whirlwind and, despite that, I had barely begun to understand Andhra food. But there was something I was sure of: the amount of love locals showed to this cuisine. Really, if you ask me, the people in the region have managed to find the sweet spot in the sour—and it is unlike anything else I had tasted. #KhabarLive