This poll season, farmers, mostly womenfolk, are forced to confine themselves to agricultural fields, keeping away from the election fever and campaign. Farmers across the Krishna district are now busy harvesting black gram, maize and post-harvesting activities of paddy that was stored in the open in the fields. Women contribute a major share of work in the harvesting of any crop.

The public meeting addressed by YSR Congress Party chief Y.S. Jagan Mohan Reddy at Avanigadda this week is a classic example of the impact of agriculture operations on the turnout of the supporters for the meeting. The number of women, including farmers, was arguably less than 5% of the total crowd at the meeting, leaving the organisers shocked. 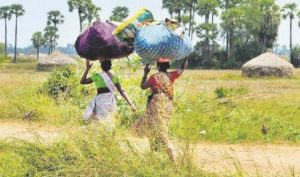 The post-harvesting operations across the district are said to be the prime reason that is forcing political party leaders to change the date and place of their public meetings.

The election schedule has an impact on political parties as well as farmers. The parties have been struggling to convince their supporters to come for their campaigns and meetings, while the farmers cite the election campaign as a major hurdle in finding agricultural labourers. 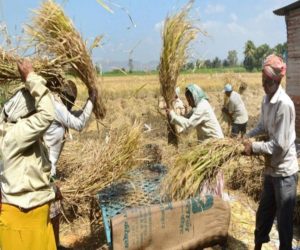 Women farmers carrying black gram on their head in Machilipatnam rural and Koduru mandal told The Hindu: “The crop in the field demands to speed up harvesting. We will exercise our vote, but we do not have time to spare for the election campaign.”

ALSO READ:  A 10-Point Plan for Seafood (Without Being Overwhelmed)

Many contestants have prepared a separate campaign plans, targeting the farmers and agriculture workers by meeting them at their doorstep in the evenings. “Our local cadre is in touch with those who are attending work in the fields, connecting them with us over phone during the nighttime,” says a the contestant. #KhabarLive