The beats are infectious, and force the bystanders to break into a jig. Yes, it is ‘Arabi Marfa’ locally referred to as ‘Marfa Band’. DJs, Nagpur Band, Jalna Band or live orchestra have failed to beat the ‘Arabi marfa’ in the city. It’s also called ‘Hadhrami Marfa’ as this form of music originated from Hadhrami, a region in Yemen in Middle East. 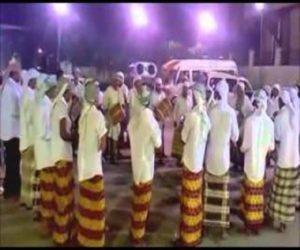 The band members can be distinguished by their dress and musical instruments. Performers are clad in chequered lungis, white shirts and scarves around the neck or heads – a similarity with their ancestral dress. “What we wear is part of the traditional dress and it adds to the attraction of the band and music. Costume plays an important role in any folk performance,” said Jaweed Faisal, a second-generation bandmaster from Old Mallepally.

The musical instruments played are mostly from the Middle East, including Oman and Yemen. The set comprises ‘Kasir Mufaltah’ – also called marfa or daff (kasir is also called dholak), where steel pots are hit with sticks and wooden strips called thapi to produce a unique sound. There no strings or wind instruments, only drumming. Most of the musical instruments are double-skinned and are the ones used in Middle East countries. Especially the kasir,” says Saber Bashar, who is into playing Arabic music for the last 40 years.

The instruments are beaten in coordination to support each other. The Kasir Mufaltah is generally used to support the medium kasir, which is played with both the hands. The wooden strips and the steel pots are hit together to add music to produce a typical rhythm. “Actually, people clap the hands to produce a song. But, as palms pain due to persistent clapping, they have started using the wooden strips,” explained Ahmed Bashar, a bandmaster.

The performers are singers too who mainly sing Arabic songs, followed by a few numbers from Bollywood and the local Dholak ke geet. “We sing what people want us to. Arabic compositions Ahlan wasahlanya, Abu bakar-ya abu salahm, usually, and, then, you have the Dholak ke geet – Sali ke Bagh, Kankariya maar ke jagaya, etc. “People ask us to sing some Bollywood numbers too and we oblige – at times, accompanied by music or just vocal,” said Mohammed Yousuf Ali, of Falaknuma.

On demand, the members of the troupe perform dance while their colleagues play the instruments. “Yemeni folk dance performed usually with daggers and swords is most sought-after by the public. We use imitation swords and daggers made of wood or plastic to ensure no one is hurt during the performance,” said Ahmed Jabri, from Puranpul. 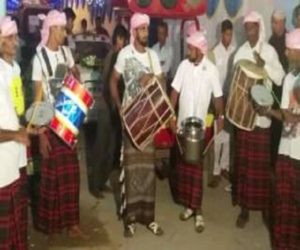 With the piano making and plastic marfa or daff finding their way into the Arabic band, the old-timers are unhappy. “For decades, the tunes of other bands have altered but, we remained unscathed by change. Unfortunately, some new boys are playing piano and it loses the very essence of the music. ‘Marfa’ music is beating the double-skinned drums and no wind or pipe instrument is used,” said Salam Bin Abdullah, of AC Guards.

While previously it was only the people associated with the Yemani or Chaush community in Barkas and Siddi or Habshi community in AC Guards, who played the band, now many locals too have learned it and set up their shops across Old City. The price the band members demand for one performance is much higher than what the local Sheri Band or wind instrument band demand.

During the Nizam rule, the music was played for celebratory occasions. The practice continues even today with it being played during the Independence Day celebrations at Golconda Fort.

The musical instruments are the ones used in Arab countries but are made locally.

Generally, the ‘marfa band’ comprises 8, 12, 16 and 22 members and they play various popular tunes. On demand, they sing a few Arabic and Yemeni songs too.

The Marfa gained immense popularity after being introduced in Hyderabadi movies including The Angrez, Hyderabad Nawabs, etc.

ALSO READ:  Do You Know, A 'Mini Gujarat' Exists In City Of Nizams Since 100 Years?

The performers are hired for weddings and receptions. They perform for religious festivals including Ganesh Visarjan, Durgasthami also. 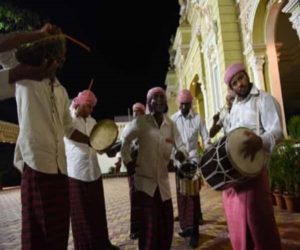 The band is more popular as it comprises mostly the descendants of the ‘Siddis’ who were brought to the city during the Nizam VI Mir Mahboob Ali Khan. “The Raja of Wanaparthy had gifted to the Nizam around 300 members who were descendants of Africa and settled in South Arabia then,” says Najaf Ali Khan, grandson of Nizam VII Mir Osman Ali Khan.

The band plays the ‘Arab Music’ or ‘Marfa’ at most functions and is popular in neighbouring States of Karnataka and Maharashtra as well. “A few people call us to perform in Middle Eastern countries including United Arab Emirates. We go by air and the travel is taken care of the party,” said Salam.

The marfa party was introduced to the city by Abdullah Bin Mohammed, (Abu Pahelwan) father of Salam, and slowly became popular in Muslim weddings. “The drumming skills and dance forms are preserved by us and we stick to it. We have not altered the marfa band by introducing other instruments,” he said. #KhabarLive