Ameenpur is one of the most populous residential areas in Hyderabad, home to thousands of residents in hundreds of colonies. These residents are now facing a series of civic issues. The roads are battered, there are no streetlights and the area lacks proper drainage systems.

“For the last seven months, there has been zero development in Ameenpur and the people are suffering as a result. The drainage system, streetlights and roads – you name it, Ameenpur lacks the basic civic infrastructure,” said Venkat Kumar, a resident and the president of the Ameenpur Joint Ventures Association. 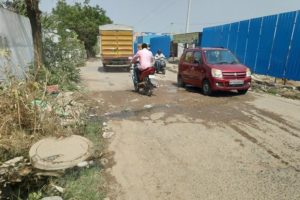 Just last year, the Ameenpur Joint Ventures Association held a protest saying, ‘No road, no vote’, demanding that the government work on these issues. Despite this, they say, nothing has changed.

Ameenpur gained popularity as a residential area, given its proximity to areas such as Miyapur and Hitec City in the early 2000s, as a result of a real-estate boom in Hyderabad. Even as it developed, Ameenpur remained relegated to the status of a gram panchayat. While it has since been upgraded to a Grade 1 municipality, it is still excluded from the jurisdiction of the Greater Hyderabad Municipal Corporation (GHMC), the city’s municipal body.

For a long time, the Ameenpur municipality had stated that they would begin work as soon as possible and the transition period from being classified as a gram panchayat to a municipality might have slowed them down.

“The municipality has its own budget allocated to it and they are fully established now. They should start working on the problems of our area,” said Kamal Nandan, General Secretary of the Ameenpur Joint Ventures Association. He added, “It’s been more than a year since it became a municipality and they have failed to provide even the most basic amenities to this area.” 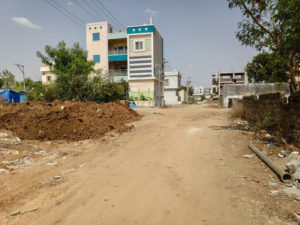 Residents have been facing these issues for several years and although there was some work done in between, locals say it was grossly inadequate. Suresh, a shopkeeper and resident of Ameenpur said “I’ve been living here for more than a decade and it is shameful that there has hardly been any progress at all. The conditions here are like those of a remote village.”

ALSO READ:  How You Can Sue Municipal Body For Pothole Accidents?

When #KhabarLive contacted Vemana Reddy, Municipal Commissioner of Ameenpur Municipality, he pointed to the Legislative Assembly and Lok Sabha elections for the delay in the work. “We are going to start the required work soon,” he added. #KhabarLive