Several Hyderabad residents say that the water supply is inconsistent and they are yet to see the fulfillment of promises made by the Telangana state government.

It’s past 4 pm at Indira Gandhi Puram in Hyderabad’s Balkampet area and it’s one of the busiest times for women there. They are making the most of two hours of water supply by filling their pots, cans and buckets from a single tap. The tap that provides the basti with drinking water has a long history, say the locals. “My mother used to fill water here, now I do,” says a 28-year-old Sumayyah while filling her pot with water, lamenting that nothing has changed. Her eight-year-old daughter stands by her side, holding a bucket and waits for her turn. 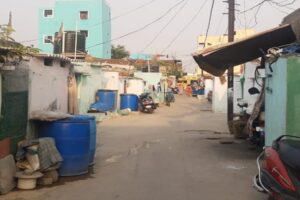 Like everyone in the line, Sumayyah fills her pot and carries it to her home, hardly 40 metres from the tap, to fill two tubs. She then hurries back toward the tap to fill her pot again. She makes 48 trips to fill the two tubs, each capable of storing 70 litres of water.

“We were supposed to get water today (Wednesday) through the water connection pipes, but the Hyderabad Metropolitan Water Supply and Sewerage Board (HMWSSB) hasn’t released the water yet,” Sumayyah tells #KhabarLive.

Ahead of the municipal polls in 2020, the K Chandrasekhar Rao led Telangana Rashtra Samithi (TRS) had promised the supply of 20,000 litres of free drinking water to every household. The scheme came into effect in January this year. This was part of the government’s efforts to ensure accessible drinking water to all its citizens. In 2019, the KCR government had slashed the deposit amounts for a tap connection in urban areas to Rs 1 for Below Poverty Line (BPL) families and Rs 100 other households. The target at the time was to provide 7.9 lakh new connections.

Despite these initiatives, slums such as Indira Gandhi Puram have gotten the water connection up to their doorstep, minus the tap. The water connection’s provided under the Rs 1 deposit scheme for Below Poverty Line (BPL) families, also stops short of entering the homes at this basti. 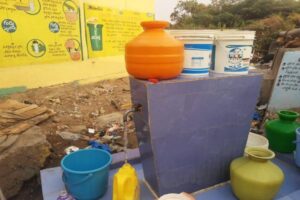 “What’s the point if there is no steady supply?” says Kumar, a resident of the basti who works at a scrapyard. “Since the scheme was announced, no bill collector from the water board has come, so that we could demand the release of water on time. Municipal elections are also over, so no one needs us now,” he adds.

The lane where Rusksana resides hasn’t received water in four days, she says, pointing to her empty tubs. She opens the cover of a pit to point at a water connection pipe of the HMWSSB, “This pipe is connected to the main water pipe. I have to connect a water pump to this pipe to draw water. Even then, the water trickles and takes over an hour to fill a tub,” says Rukshana. “Most houses don’t have bore water. Only a few apartment buildings do and they don’t share. So the whole basti relies on that one tap outside,” she adds.

ALSO READ:  Hyderabad's 'Ganga-Jamuni' Culture - In A Style Of Its Own!

When contacted, HMWSSB officials said that they will look into the issue. An official said that since the announcement of the free drinking water scheme, bill collectors had stopped making ground visits.

Kumar said he had tried reaching out to the local corporator and municipal officials to try to establish a water ATM at the basti sometime in 2019, “The water we get is dirty and not fit for drinking. When you store the water in the tub, there is always dirt settling down at the bottom. Not everyone boils the water before drinking,” says the 23-year-old, adding, “No one responded to my request for setting up a water ATM.” 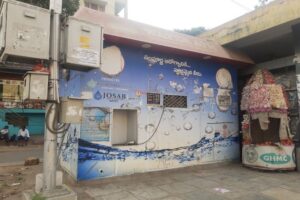 Another ambitious project of the Telangana government, which was launched tie-ups to several non-profit groups was the ‘Water ATMs’ at key locations in the city in 2018. The aim was to provide affordable drinking water access to benefit 1.50 lakh people by setting up over 250 Water ATMs. Two years after the project started, several of the water ATMs, like the one in Sanathnagar, have become dysfunctional.

ALSO READ:  'World Vegan Day' Challenge To 'Being A Vegan In Hyderabad'

“There is a lady who allows us to draw water from a pipe at her home. She charges us Rs 100 a month,” says 38-year-old Suneetha, who lives with her four children and mother under the Fatehnagar-Balkampet bridge 3km away from the Indira Gandhi puram basti and 200 meters away from the water ATM at Sanath Nagar depot. The family survives on Rs 3,000 Aasara pension. Her ten-year-old daughter unrolls a hose pipe, the other end of it connected to a tap inside the compound of a house across the road. “There used to be a water ATM at the bus stand. We used to get chilled water from there but it stopped working two years ago. It was a 200-meter walk, and our present set up is better,” she adds.

The water ATM closest to where Suneetha resides was at the Sanath Nagar bus depot. The water ATM didn’t work and took up space on the footpath of the bus depot. A tea seller opposite the unit said, “If they provide water which is clean, there is no reason why people won’t use it. A lot of people from nearby localities used to come to the Water ATM here. But it wasn’t properly maintained by the non-profit and some people complained about finding worms in the water. They eventually shut it.”

In the meantime, localities such as Indira Gandhi Puram getting access to a steady supply of water remains an unrealised dream, despite the government’s measures and assurances. #KhabarLive #hydnews