The ancient folklore to distress the labour is called ‘Jadakoppu-Kolatam‘ in Telangana, which gives relive to stress and make happy living with its song words and playful acts. 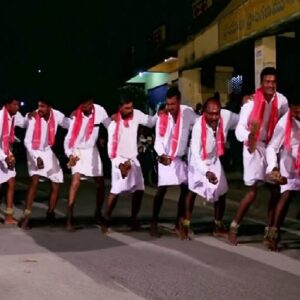 Telangana is home to a wide range of folk art forms, and while some are slowly losing their presence, others are trying to stand despite the fast-paced changes in the cultural landscape. The Jadakoppu-Kolatam is one such age-old and popular art form in many parts of Telangana that manages to stay afloat, thanks to the efforts of many artists.

In this art form, each artist holds chirtal or kolas — a percussion instrument made of wood — in one hand and a saree, which is tied to a pole on the ceiling, on the other hand. With anklets tied to their feet, they go around in a circular motion, matching their rhythms and voices to a Dappu or tabla, all the while weaving a jada (pattern) with the sarees, by the end of the song and dance. 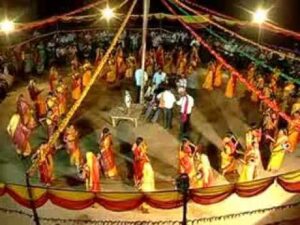 The artists weave five types of jada or braids, putting in hours of meticulous weaving while singing and dancing, with no margin for error. Each type of the jada requires the artists to sing and dance to different songs. The songs reflect the devotion, spirituality, labour of peasants, romance, and love of the local residents, whose livelihood is mostly attached to land and cultivation. Individuals often tell their stories in a metaphoric manner by personifying everyday objects through their songs.

ALSO READ:  Why Farmers Can Bring Governments Down If Agri-Markets Are Not Fixed?

The process is nothing less than a feast to the eyes and ears. Sometimes, the songs also reflect the epic conversations of Radha-Krishna and Rukmini-Gopika.

Unlike other art forms, performers are not outsiders, but usually someone from the neighborhood. The performance, which lasts for hours, usually takes place in the middle of the village or at a temple or at a large place, which can accommodate the large number of people who come to witness the song and dance. The artists usually choose festivals such as Ugadi, Diwali or the local carnivals of folk goddesses to put up the performance.

Until a decade ago and earlier, the art form was visible in many areas of Telangana, but due to the shrinking rural cultural spaces, the art form is also slowly losing its presence. According to the existing Jadakoppu-Kolatam artists, the next generation, which is into popular culture, is not interested in learning this art form.

In Jagtial’s Allipur of Rayakal mandal, a tiny village, there are over 25 Jadakoppu-Kolatam artists who use every occasion to stage a performance in their village and neighbouring villages. The troop is even called to other places for community festivals and folk carnivals.

According to the artists, their interest and enthusiasm to sustain the art form is taking them to different places. K Tirupati Rao (36), a Telugu lecturer from Allipur of Jagtial born into an agricultural family, is an art enthusiast who is promoting the art form. Tirupati Rao gathered around 25 men, including traditional Jadakoppu-Kolatam artists, and trained young people who were interested. 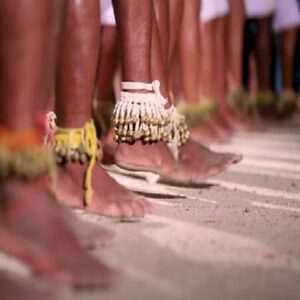 Speaking to #KhabarLive, he said, “I used to enjoy this art form during my childhood but as I grew, it somehow lost its presence in the state. Six years ago, I thought of bringing it back to the fore, and with the support of old artists, who have welcomed it, it became a reality. For every Dasara and other local festivals, our troop goes out and performs.”

Tirupati Rao said, “The way people, especially the youth, are receiving the art form has changed. Many are enjoying witnessing the performance and archiving it, while others are showing interest in learning the art form.”

Battula Nagaraju (22), a B-Tech graduate who recently joined the troop, said “I have always been fascinated by the art form. We are ready to go anywhere and perform if it helps keep the art alive. For us, money doesn’t matter.”

Neeli Reddy (60) is one of the oldest artists of the Jadakoppu-Kolatam. In conversation with #KhabarLive, he said that this art form is very inclusive as peasants from different castes are part of the performance. Neeli Reddy said that he and his companions had learned the art from a Dalit artist named Nagaiah, when he was young. “We used to play in the moonlight. Since then, we have been singing the same songs, which he taught us. All of them are folk songs, and we are getting a lot of traction.” 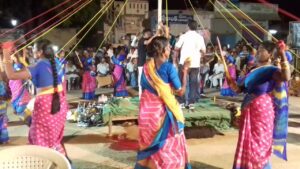 Recalling a recent performance that drew thousands of people, Neeli Reddy said, “We are glad our effort is being recognised. People are inviting us to give performances in their villages too. We are ready but we can’t afford to travel long distances as all of us are engaged in agricultural works.”

Historically, it was men who predominantly performed or embraced the art form, but later women also joined in.

Dr Gaddam Venkanna, professor of Folk and Tribal lore at the Telugu University, said that there was not much historical evidence on Jadakoppu-Kolatam, though it is a popular art form of folklore in rural areas of Telangana.

Speaking to #KhabarLive, he said, “Kolatam and Jadakoppu were both different artforms but seem to have become one over a period of time. Jadakoppu might have also been an extension of Kolatam as the latter finds a mention even in epics such as Bhagavatam and Basava Purana, but references to Jadakoppu were not found anywhere.” 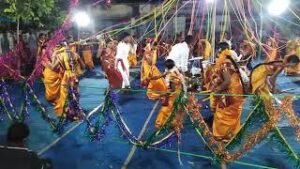 According to the professor, there is no homogeneity in the art form and it changes as per the region or local cultural aspects. He further observed that the art form was inclusive in nature as peasants and coolies used to perform it during their leisure time or after finishing agricultural work. He also said that there is a need to encourage the art form by setting up training workshops. #KhabarLive #hydnews