The million dollar question remained unanswered as the historic Golconda fort is fully secured for thousands of visitors who throng everyday in Hyderabad. 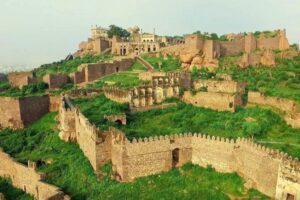 Hundreds of tourists, or even thousands during the holidays visit Golconda fort every year in Hyderabad, given that the massive fortress it is a must-see historical site known globally. While it is a wonder in its own right, the unfortunate part of it is that visitors, including those from Hyderabad, aren’t aware of the fact that what they see is just a tiny portion of the actual fort that once was a walled city. 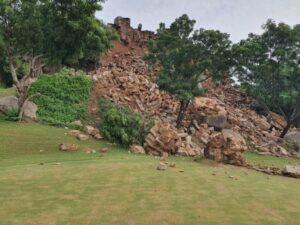 The idea of what Golconda fort is, depends on who we ask about it. Anybody from this generation will mostly know about the Bala Hissar (royal area; literal meaning is high fort) part of it, which is the ticketed area controlled by the Archaeological Survey of India (ASI). However, what most don’t know is that the Golconda fort area in itself is about seven kilometres with scores of smaller structures in it. 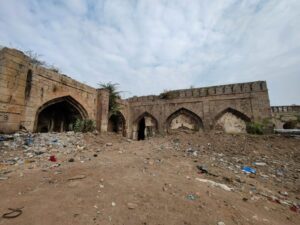 In fact, many visitors even miss important details on the fort’s Bala Hissar darwaza. The motifs on the door include Shirdals from Persian mythology, peacocks and Yali (from Hindu mythology). A Shirdal is a creature from Persian mythology, which is said to have the body, tail and back legs of a lion, and the head along with the wings and front talons of an eagle. Interestingly, Shirdals also a part of the ‘Alam’ motif feature that adorns inner the walls of the Charminar. 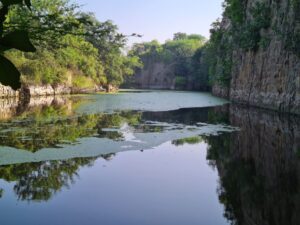 In total, the Golconda fort has eight gates, with five still being accessible (of which the Makkai/Mecca darwaza in under army control), while two are in the military area and another is in disuse (Patancheru darwaza). Thanks to decadal encroachments (mostly unauthorised construction of homes) by locals and real estate developers, many parts of the medieval monument today don’t exist. 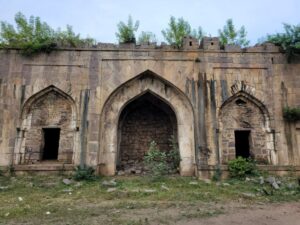 According to old history book, apart from its eight gates (Mecca, Banjari, Bodli, Bahamani, Moti, Fateh, Patancheru and Jamali) which are still intact, the fort also had 87 bastions, palaces, mosques and several other monuments which have all mostly been demolished and lost to encroachments. <<< Read More >>> #KhabarLive #hydnews