The pollution is largely attributed to industrial effluents, mainly let out by pharmaceutical and bulk drug companies, which can be found in abundance in and around Hyderabad. #KhabarLive tries to dig out the reality with its critical eye in and around Musi river bed.

Just beyond Hyderabad’s outskirts near Ghatkesar lies the village of Edulabad, most noted for a massive lake that borders it. Locals say that the lake had provided for all their needs for as far back as generations can remember. But all that is now under threat. For the past few years, in an annual ritual of sorts, thousands of dead fishes wash ashore the lake, locally called the Laxminarayana cheruvu, allegedly due to pollution as it is located downstream from the city.

However, the real picture of pollution can clearly be seen a few km away, as one heads towards the village of Pillaipalli. The Musi river, once Hyderabad’s lifeline, passes through here and hits one of the first out of 23 weirs (locally known as kathwas) in the state, after passing out of the city. The result? The water can be seen bubbling and spewing froth even as a pungent smell hangs in the air.

The pollution is largely attributed to industrial effluents, mainly let out by pharmaceutical and bulk drug companies, which can be found in abundance in and around Hyderabad.

“We are facing scores of problems due to the river. Until around 20 years ago, we used to drink this water and used it for bathing and cooking purposes as well. But all that changed with the pollution,” says Raju Gattupally, a local youth.

But while the state government has been able to provide alternate water for surrounding villages to use for drinking and other consumption purposes, the local residents still use the polluted water for another purpose: irrigation.

“What choice do we have? While the flowing water is supposed to clean itself in principle, that is not possible when scores of chemical companies release untreated effluents into the river. Additionally, we have caught trucks coming all the way from Patancheru and Sangareddy and dumping it here in the night after locals formed patrol groups,” explains Batte Shankar, the sarpanch of Edulabad.

Shankar, a convenor of the Musi Parirakshana Samithi, has been fighting to revive the lake since the year 2000.

“We have staged protests, blocked roads, burnt effigies and raised slogans, but nothing seems to have moved successive governments to take action,” he says.

Singaram Sukkaiah, a local farmer, says, “Many crops are getting spoiled because of the pollution. The women who sow the paddy crops in the water have developed rashes and allergies and they aren’t even able to cook at home. We are badly hit as even the yield has halved over the years.”

“If people here earn Rs 20, they end up spending up to Rs 50 for medical treatment,” he adds.

The problems of Edulabad don’t end with the village or even the mandal, as one often overlooked point is that once the crops are irrigated with this chemical-laced water and ready to harvest, they can be packed off and sold anywhere in the state.

“Most of the produce goes back to Hyderabad only, since we are close to the city and transportation costs are relatively lesser,” one farmer explains. 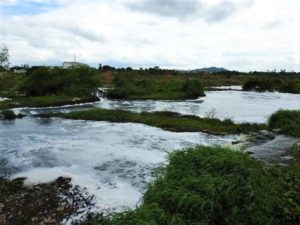 “An important point to note is that we are located in a semi-arid area where recharge rates by rainwater are low. We are also situated in an inter-basin area as we receive water from the Godavari basin and transport it to the Krishna basin,” says Dr Harish Gupta, Assistant Professor at Osmania University’s Department of Geochemistry.

Harish and his students have been conducting several studies to ascertain the magnitude of the problem.

“There are two processes we have to understand. Bioaccumulation and biomagnification. When water evaporates naturally due to the sunlight, a large amount of these chemicals continue to stay in the riverbed. Additionally, the soil on each side of the river is also absorbing elements and this has reached a saturation point, thereby allowing these chemicals to seep into the groundwater and water table as well,” he explains.

In fact, farmers in Edulabad and surrounding villages say that the water is so rich in chemicals that they don’t need to add any pesticides to their crops.

“Leafy vegetables absorb heavy metals quickly. Additionally, a lot of fodder for cattle in and around Hyderabad is grown with water from the river and the milk from that cattle is then sold across the city,” the assistant professor says.

The chemicals, as a result of being present in plants and cattle, also enter the food chain. As they make their way higher up the chain, the concentration of the substances ‘magnifies’ or amplifies, making the problem worse.

“In some cases, we found that the toxic chemicals were present at levels that were 70,000 times the original concentration. Additionally, groundwater flows in several directions and can carry these chemicals with them, far away from the source, making it a public health hazard in the long-run,” Dr Harish Gupta says. 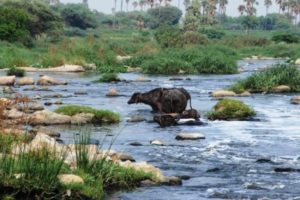 In Edulabad for example, many women have had miscarriages, while children faced issues like stunted growth and deformed teeth. Locals say that the vision of children was also affected when they used the water.

Meanwhile, adults also face a slew of issues like joint pains and rashes on their skin; the health of cattle is also affected.

“I have 10 buffaloes and on average, each buffalo used to give me around 10 litres of milk a day. However, because of the chemical pollution, they have grown weak and skinny and they are barely giving us 3 litres of milk a day. That is our source of livelihood and we face a lot of difficulty now. There are many like us who are facing massive loses,” says Mallesh Yadav, a herder.

Even the sheep that were distributed by Telangana Chief Minister K Chandrasekhar Rao to the Yadav community as part of a massive distribution programme, did not survive, according to locals.

“At least with humans, we can warn them that the water is polluted. What about the cattle and other animals like dogs and pigs that roam around in the village? They end up bathing in this water and fall sick as a result,” Shankar adds.

The presence of these chemicals in the body can also result in health issues like cancer, diarrhea, jaundice, typhoid and other water borne diseases.

What makes it really difficult for researchers and policy makers alike, is that there is no substantial data or studies that have been conducted to study the magnitude of pollution in downstream Musi and the resulting health effect on the people of Hyderabad.

A research by Dr Harish Gupta on the ‘Enrichment and fractionation of heavy metals in bed sediments of River Narmada’ showed the presence of heavy metals like Iron, Chromium, Manganese, Lead, Copper, Cadmium, Nickel and Zinc.

Many fear that a high concentration of similar metals may be found in the Musi’s riverbed if a study were to be conducted.

The Hyderabad Metropolitan Water Supply and Sewerage Board (HMWSSB) recently ascertained that Hyderabad generates 1,483 MLD of domestic sewage per day, estimating that another 500 MLD of sewage was generated from other sources.

Assuming that the 20 Sewage Treatment Plants maintained by the Board, with a total capacity of treating 750 million litres per day (MLD), are operating at full capacity, this means that 1,233 MLD of untreated domestic sewage in the city ends up in the Musi. And this doesn’t even include the chemicals and effluents released by industries into the water. 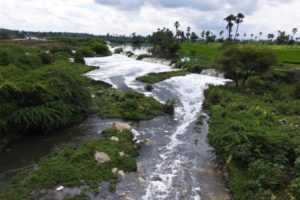 According to the Telangana Pollution Control Board’s (PCB) data for May 2018, as part of the National Water Quality Monitoring Network (NWMN), samples of water taken at Pratapa Singaram, just a few km upstream from the kathwa, throws up some shocking results.

The Biochemical Oxygen Demand (BOD) level of the river, which determines if the water is able to sustain life, is 22. For context, anything above 4 mgpl is considered polluted.

ALSO READ:  Sold As Slaves' And 'Tortured Like Animals' In Saudi Arabia, The Horrific Tales Of 'Human Trafficking Nexus' In Hyderabad

The Total Dissolved Solids (TDS) level of the river at the same point was 965 mg/L, while anything above 150 TDS is considered unfit for human consumption. It is this same water, without purification, that is used to irrigate crops consumed across Hyderabad.

Despite this, even the PCB could not get any conclusive data on the extent of the presence of heavy metals in the water.

The ruling TRS-government in Telangana has maintained that cleaning up the Musi and restoring it to its past glory was one of its major priorities, even constituting the Musi Riverfront Development Corporation (MRDCL) as a Special Purpose Vehicle (SPV).

However, though it came into existence via a Government Order dated March 25, 2017, hardly any work has been done. While some encroachments have been demolished, the cleaning process is yet to start.

Additionally, the corporation is yet to make its plans public, on how it plans to deal with the large amount of domestic sewage and industrial effluents that enter the river everyday.

“The Musi is a lifeline for the areas of Hyderabad, Rangareddy and Nalgonda. I remember as a child, when the water was clean and we used to drink it without any problem. The main reason for the pollution are pharma companies and bulk drug manufacturers, who have turned the water poisonous. Effluent Treatment Plants largely remain on paper or are switched off after construction,” Batte Shankar alleges.

“More than 1.5 lakh acres of crops and several lakh people are dependent on this water. Under the idea of ‘development’, successive governments and officials granted permission to these industries without thinking about the future and what would happen to the generations that followed them,” he adds.

Many locals in the villages around Hyderabad also rue that they had actively participated in the Telangana struggle for separate statehood, in the hope that things would change once they had their own state; quickly adding that it was all in vain.

“We are looking to the government for help. The Musi is Telangana’s own river and we are requesting that the state should look into the issue and take immediate steps to clean the river by ensuring that companies strictly follow the rules and also upgrade the existing STPs,” Shankar says.

“In these areas, the water we drink is polluted, the food we eat is polluted and even the air we breathe is polluted. Additionally, the presence of antibiotic resistant bacteria or ‘superbugs’ has also been confirmed in this water. This a crucial issue and needs to be addressed urgently so we can regain our right to life,” he adds. #KhabarLive